Pope arrives at mosque in Muslim neighbourhood of Bangui 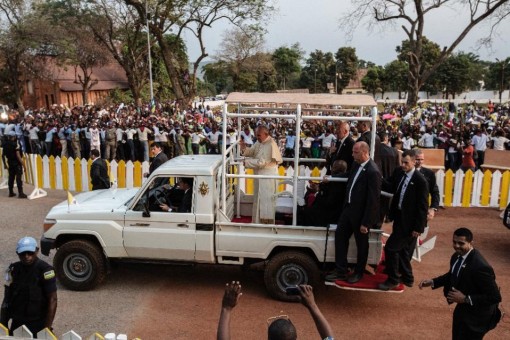 Pope Francis arrived on Monday at a mosque in a flashpoint Muslim neighbourhood in the Central African Republic capital Bangui, on the most dangerous part of his 24-hour visit to the war-torn nation.

At the central Koudoukou mosque, he will meet Muslim leaders and local residents of the PK5 district, a maze of red dirt roads and flimsy shacks at the heart of recent sectarian violence.

At the mosque, hundreds of people were waiting to meet him in a relaxed atmosphere despite the tight security with the visit taking place under the watchful eye of UN peacekeepers from the MINUSCA force, an AFP correspondent said.

After meeting five local Muslim leaders, Francis will address the crowd in a ceremony intended to promote religious reconciliation.

Later on Monday, he was to celebrate a huge mass at the capital’s 20,000-seat Barthelemy Boganda Stadium before wrapping up his three-nation Africa tour and flying back to Vatican City.