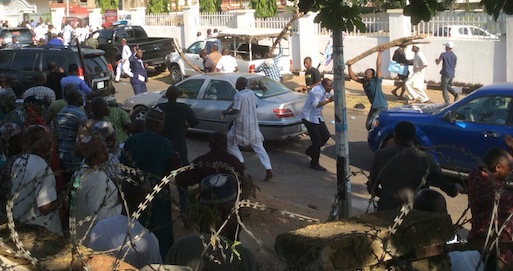 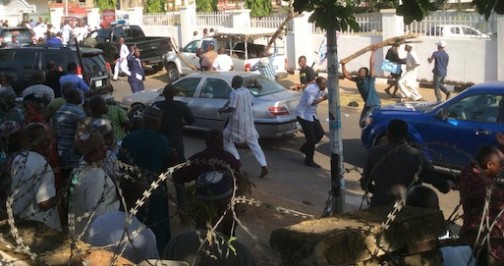 Supporters of James Faleke and Yahaya Bello, late Prince ‎Abubakar Audu’s running mate and runner up respectively, on Monday clashed at the All Progressives Congress (APC) secretariat in Abuja.

Both men are in contention over who will stand on the platform of the APC for the Kogi gubernatorial race.

It will be recalled that the vacuum for the party’s candidate was left open when Audu died on ‎Nov. 22 on the day results of the election in the state were declared inconclusive.

Faleke’s supporters arrived one hour later and both groups started to throw stones ‎and sticks at each other before police reinforcement came.

The police was able to push back the two groups to opposite sides of the street‎ where some were still chanting solidarity songs.

‎NAN reports that stones and sticks used during the fracas littered the street after of the protest.

The windows of many cars were smashed, including that of a reporter with African Independent Television covering APC, Mr Anoyoyo Oghiavboghe.

NAN reports that some National Working Committee members and leaders of APC, including Gov. Nasir El-rufai of Kaduna State and Sen. Dino Melaye were holding emergency meeting at the secretariat.