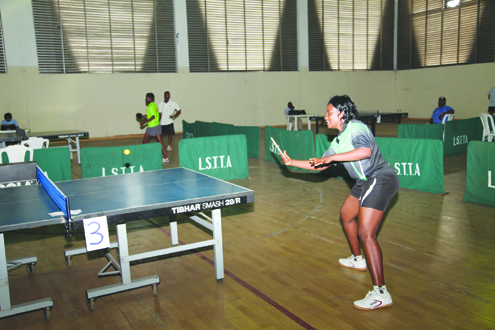 Tennis players in action at a recent tournament at the Teslim Balogun Stadium, Surulere, Lagos.

The News Agency of Nigeria (NAN) reports that the players would feature in 22 events in the five-day tournament.

These are the senior, junior and cadet categories which have five events each.

The junior events are the junior boys and girls, boys’ and girls’ doubles and the mixed doubles.

Others are the coaches’ singles, sport writers’ singles and the veterans’ singles.

Some of the seeded men players are: Ahmed Adeyinka, David Fayele, Wale Olaniyi and Ganiyu Ashimiyu, while in the women’s category are: Sidi Yaya, Taiwo Williams and Alimot Ayinla.

NAN reports that the annual competition which commenced on Nov. 30 with the preliminaries, would end on Dec. 4.

The competition which used to be called the Asoju Oba was modified this year in honour of its late founder, Chief Molade Okoya-Thomas.

During his funeral in March, his son promised that the competition would continue to hold annually and added that a name change was likely to be effected.

Meanwhile, Oluranti Lajide, an International Table Tennis Federation (ITTF)-certified referee, who is the tournament referee, has said that the chart was well programmed, to ensure a hitch-free tournament.

Lajide said that they were working to make sure that this year’s edition was just as successful as its previous editions.

“We want this edition to be just as successful as the past ones, or even better. We are all working in synergy to achieve this,’’ he said.

Lajide, however, appealed to participants to ensure that they were at the competition venue, as and when due.

“We want them to be disciplined and to be of good conduct. We don’t want a situation where walkovers would be awarded.

“We don’t want to be working behind schedule, all through the competition,’’ Lajide added.