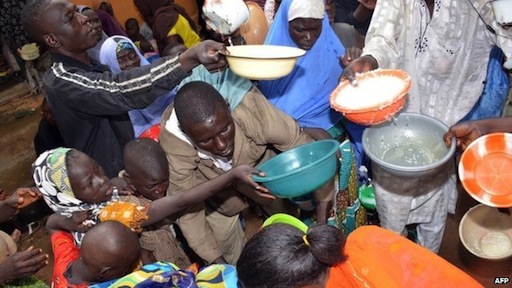 Over 410 births were recorded between August and September and 187 marriages were conducted at Internally Displaced Persons camps in Borno and Adamawa states, the Director General of National Emergency Management Agency, Muhammad Sani Sidi stated when members of Bring Back Our Girls Group (BBOG) paid him a courtesy call in his office.

Sani Sidi explained that 100 marriages were conducted in Maiduguri camps alone and 87 were recorded in Adamawa camps.

He said Emergency Education for IDPs’ children became a major priority after unprecedented insurgency attacks on students, teachers and schooling infrastructure where at least 269 teachers lost their lives.

He said the agency in ensuring efficient management of camps has trained personnel in camp coordination and camp management (CCCM) and deployed to manage various IDP camps in Borno, Yobe and Adamawa and to provide the specialised needs of vulnerable people during emergencies.

He appealed that the advocacy group should extend their platform to other issues like unaccompanied minors and mass childbirths in the camps as disaster management is multidisciplinary, multidimensional and multitasking.

Earlier, the leader of the group, Dr Oby Ezekwesili, expressed displeasure over the abduction of the Chibok girls, saying that today marked 596 days they have been abducted and looked up to NEMA for more cooperation and mobilization efforts to protect and care for the vulnerable in the society.

Similarly, the Chairman of the Bring Back Our Girls Group, Aisha Yesufu, stated they were at agency’s head office for collaboration in areas of education, IDPs living conditions, security, health and so on, and how their platform can be helpful to support the efforts of the Federal Government and the IDPs where the agency deem it necessary.