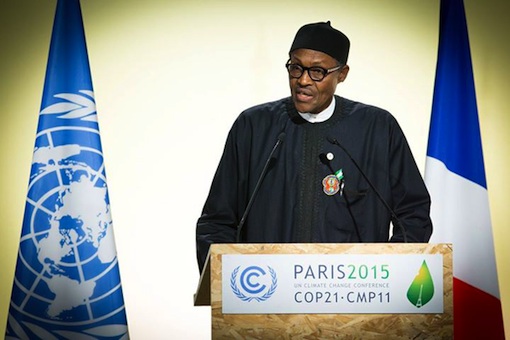 President Muhammadu Buhari on Tuesday in Paris asked developed countries to make strong financial commitments to the 14 billion dollars urgently needed to revive the Lake Chad and save communities dependent on the river from extinction, noting that, this will curb migration to Europe.

Addressing a high level meeting on “Climate Change Challenges and Solutions in Africa”, on the sidelines of the on-going UN Climate Change Conference, COP 21, President Buhari said no fewer than five million people living in the Lake Chad Basin countries have been displaced by the depletion of the lake due to climate change.

The President said the shrinkage of Lake Chad, a former island sea, had resulted in increased social conflicts, high rates of migration and cross border movements.

“Nigeria has a large population of over 170 million people and in some parts of Northern Nigeria, a farm that used to belong to 10 people now belongs to over 100 people. They have no other place to live and no land for cultivation,’’ he said.

President Buhari recalled that a research conducted by a professor in a London university and published more than three decades ago had predicted that unless one or some of the rivers from the Central African region are diverted to empty into the Lake Chad basin, the river will dry up.

“The amount of resources required and the high technological expertise and infrastructure needed to be undertaken to revive the Lake Chad has to be mainly financed by the G7 and the United States.

“The cost is great and more than 14 billion dollars is needed to revive the Lake.

“But if that is achieved, at least five million people from Central African Republic to the Lake Chad Basin countries (Chad, Niger, Nigeria and Benin) will be rehabilitated.

“When this is done those who are daring to cross the Sahara desert and the Mediterranean to come to Europe will remain at home because they have land where they can cultivate and earn a respectable living,’’ he said.

President Buhari used the occasion of his address on the second day of the climate change conference to reiterate his appeal to leaders from the developed countries to make revival of the Lake Chad a top priority.

On Nigeria’s plans to tackle climate change, President Buhari told the meeting attended by the French President, UN Secretary-General and several African leaders that the country was blessed with natural gas to boost the country’s energy needs.

He said although the technology to optimally utilize natural gas in the country was expensive for the country to maintain, Nigeria welcomes international partnerships and initiatives for lower carbon in the oil and gas sector that focuses on reducing natural gas flaring and capturing the product for commercial use.

Recognizing the acute threats that climate change posed to Nigeria’s development, President Buhari said his administration was ready to embrace several opportunities presented by the challenges posed by climate change.