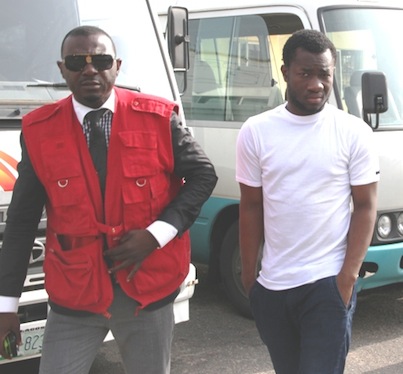 The Economic and Financial Crimes Commission on Monday, November 30, 2015 secured the conviction of one Abraham Adasah before Justice Peter Kekemeke of the High Court of the Federal Capital Territory sitting in Apo, Abuja.

Adasah was arraigned as second accused on Wednesday, October 14, 2015 alongside Nosa Ohenhen Ericson on a 6-count charge of forgery and conspiracy, with the latter being the first accused.

The duo, pleaded not guilty to the charge preferred against them.

In a dramatic twist, on October 29, 2015 when the trial was to commence, Adasah’s counsel, Olusoji Toki, informed the court that, they had approached the prosecution for a plea bargain.

To this end, E.V Dalyop, prosecuting for EFCC, asked for a short adjournment in order to conclude the agreement before going ahead with the prosecution of the first accused, Ericson.

Granting his prayers, the court adjourned to November 30, 2015 for the parties to perfect their plea bargain agreement, and for hearing to commence on first accused person.

At the resumed sitting on Monday, Dalyop informed the court of a plea bargain agreement in respect of Adasah and then, proceeded to make a summary of the facts of the case with documents tendered.

The plea bargain agreement was shown to Adasah and was asked by the court, if the facts presented by the prosecution were correct and if he entered into the agreement voluntarily and without undue influence to which he answered, “Yes”.

Consequently, Justice Kekemeke convicted Adasah on all the 6-counts of conspiracy and forgery preferred against him with a fine of N100, 000.00 (one hundred thousand naira) on each of the count.

On the other hand, the prosecuting counsel presented PW1, Friday Ebelo, a Principal Detective Superintendent of the EFCC to signal the commencement of trial against the first accused, Ericson.

Testifying, Ebelo told the court that, a petition was received from the Immigration Liaison Officer of the British High Commission, Mr. Purewal, against the accused, and thereafter, investigation commenced.

“One of the forged account statements was traced to an address in Benin, a church building off Sakponba Road in Benin. The first defendant’s phone number was traced through the account opening package. He was consequently arrested and taken to the Edo State Police Command where a petition against him was shown to him.

“We obtained his statement where he made mention of the second defendant. Both were arrested and brought to Abuja. The forged letters were found in the email box of the first defendant, Ericson”, Ebelo stated.

The documents were tendered and admitted as exhibit A.

The witness further explained that, “the defendant volunteered two statements; One on the February 20, 2015 when he was first arrested and the other on February 23 after his email account was checked”.

Other documents tendered and admitted as exhibits include:

Justice Kekemeke adjourned to December 1, 2015 for continuation of hearing.