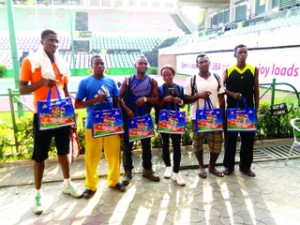 President of Nigeria Tennis Federation, Engineer Sani Ndanusa has charged Nigeria tennis players to perform better in the 15th edition of Governor’s Cup Lagos Tennis Championship.
Speaking at a media parley to herald the International Tennis Federation, ITF approved tournament held Tuesday at Lagos Lawn Tennis Club, Lagos Island, Ndanusa, former Nigerian Minister of Sports, said it is high time the local players stopped playing second fiddle in the competition which is being staged at home.
The annual tournament will hold from 5 – 19 December at the Lagos Lawn Tennis Club.
Ndanusa, who was worried about the performance of Nigerian players since inception of the competition, said the time has come for the local players to take their rightful place and compete with the foreign tennis players.
He said they can only achieve success in the championship if they are fully prepared to give the foreign players a run for their money.
“Time has come for our local players to prove to the foreigners that they can compete with them. They need to raise their game and remain focused. Nigerians are looking forward to the day one of the local players will win Governor’s Cup,” he said.
Ndanusa expressed gratitude to Lagos State Governor, Akinwunmi Ambode, for sustaining the competition, which is used to celebrate the sitting governor of Lagos State since the administration of Asiwaju Bola Ahmed Tinubu and that of Mr. Babatunde Raji Fashola.
He also thanked the Local Organizing Committee, LOC, headed by Chief Pius Akinyelure for painstakingly putting together a superb competition in order to ensure continuity with excellence.
In his address Engr. Afolabi Salami, the vice chairman of the LOC, who stood in for the LOC boss, explained that the total prize money for the championship is 80,000 dollars, with the women’s event taking the lion’s share of 50,000 dollars.
He noted that getting sponsorship funds for the championship has been a herculean task, saying that the major sponsors, Etisalat Nigeria and First City Monument Bank (FCMB) could not sponsor it this year due to unforeseen circumstances.
“We thank both Etisalat and FCMB Bank for their invaluable support over the last five years and we stand consoled by their promises to come back on stream in 2016,” he said.
Meanwhile, Chairman Lagos State Sports Commission, who is also Special Adviser on Sports to Governor Ambode, Mr. Deji Tinubu, has appealed to the media to give the competition good coverage.
Tinubu told journalists in Lagos that the Governor’s Cup has come of age and he wants this year’s edition to enjoy good media coverage than the previous one.
Tinubu, who commended the media for their effort in the last 15 years of the championship, noted that Nigerian journalists are in the best position to promote and sell this event to the world.
He appealed to the sporting press to give the tournament thorough coverage, while special attention should be given to Nigerian players who are taking part in the championship.
“The championship has attracted international players who are looking forward to this tournament. I am appealing to the media to give this championship good coverage so that the tourney will record huge success.
“I am using this medium to congratulate the local organizing committee for sustaining the tournament for the past 15 years. I must say that this tournament has put Lagos on the world map. I wish all the participating tennis players success in their outing,” he said.