Save us from police harassment, Lagosians beg Assembly 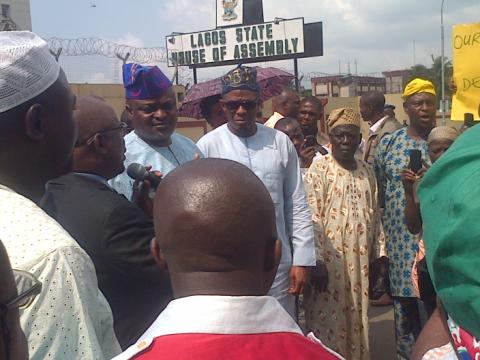 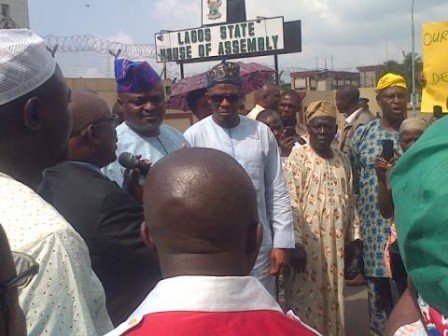 Scores of residents of Lagos Island in Lagos State, Nigeria stormed the state House of Assembly on Tuesday demanding that the state lawmakers should intervene in their plight as they were daily harassed, intimidated and hounded into detention by the police in connivance with some people in the area.

The residents, through their leaders and Executive Secretary of Concerned Citizens for True Justice, Prince Adedamola Adele Shonibare, told the lawmakers that their plight began in 2014 when the Assistant Youth Leader of the APC in Lagos Island, Mr. Ashake, was shot dead by some people the protesters called political agents.

According to the protesters, the agents were led by someone they gave his nickname Abija.

“We reported the matter at the Central Police Station in Lagos. The principal suspect was arrested and was transferred to the State Criminal Investigation Department (SCID), Panti, Yaba.

“The DCP, Panti, Mr. Gbenga Adeyanju took over the matter and within a short period of time, the suspect was released despite the intervention of the Oba of Lagos, Rilwan Akiolu, because he (Oba Akiolu) was duly informed of the development.

“Abija and his gang members have been terrorising the people of Lagos Island for a long time. They have injured and maimed many people in the area,” Shonibare said, alleging further that five people from the community, who were coming from a social function in June this year, were beheaded at Ajah and that the suspected murderers took the victims’ heads away.

According to Shonibare, the current Area Commander of the area, Mr. Salmon Dogo, has also led an operation to arrest the suspects in the matter after which they were all taken to the Special Anti-Robbery Squad, SARS, but added that the suspects were released without any intensive or thorough investigation.

He also said that about a month ago, the Area Commander in connivance with a prominent woman started harassing, intimidating and persecuting innocent people in order for Abija and his gang to come back to the community.

“The community did not banish Abija, but the offence they committed is driving them away.

“The moment they come back to the community, the law would take its course. Nobody will attack them, but they must be arrested by the police and prosecuted.

“The police are harassing, intimidating and arresting innocent members of the community because the Area Commander knows that the law must take its course.

“In fact, the Area Commander invited me to his office on three different occasions to plead that I should help him persuade the community people that Abija should come back to the community,” he said.

The issue, Prince Shonibare said, took him to Abuja where he met with the Inspector General of Police, Mr. Solomon Arase, and was referred to the Deputy Inspector-General in charge of Finance and Administration, who promised to look into the matter.

Shonibare said he met again with Arase when the latter visited Lagos last week and that Arase promised to look into the matter.

He lamented that instead of working to rid the area of thugs as complained, the police now arrest people indiscriminately.

He said he got information that some traditional chiefs in Lagos Island called the state Commissioner of Police, Mr. Fatai Owoseni and told him that the police should not release the people that were arrested indiscriminately in the area.

He did not mention the names of the chiefs but said he had the names.

“Ashake was murdered by some political thugs on Saturday September 20th, 2014, when former President Goodluck Jonathan came to Lagos.

“After that, they started harassing, molesting and intimidating our people. The problem now is that the police want to avert justice, they don’t want justice to take its course,” he said.

Another resident of the area, Mrs. Fausat Lawan, accused agents of the Peoples Democratic Party, PDP, of causing problems in the area.

In one of the incidents, the woman said they destroyed her property and wounded her before the agents went to her house to abduct her son.

She said that the matter was reported at Lion Building, and appealed to the government to talk to the woman, who sponsors the agents, to release her son.

“People should help me, we are APC members, but we are being harassed by PDP agents.

“They also wounded my daughter-in-law and they have been making life difficult for us,” she lamented.

Speaker Mudashiru Obasa assured the protesters that steps would be taken to address the issues in the petition they submitted to the House.

“We have seen your petition, but don’t cause any trouble. We were not there when these things were happening, but we will take the necessary steps on the matter.

“The government would not allow anybody to suffer. We will punish whoever is guilty, and the person would be dealt it based on the judgment of the court,” he told them while promising that the House would ensure that whoever had been arrested from the area unjustly is released as soon as possible.

He appealed to the protesters to be peaceful and go about their activities while assuring that the state Commissioner of Police, Fatai Owoseni, would be told to intervene in the matter.