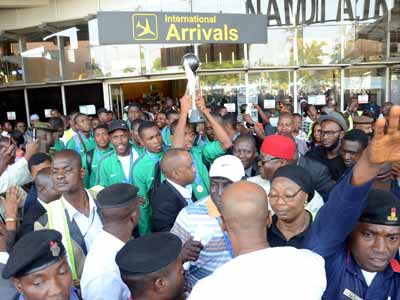 Nigeria Football Federation, NFF, says it has received a notice from FIFA admitting its error in awarding Nigeria captain Kelechi Nwakali the bronze boot award of the recently –concluded FIFA U-17 World Cup finals in Chile.

NFF General Secretary, Dr. Mohammed Sanusi, disclosed in Abuja Tuesday that ity received a letter signed by Mustapha Fahmy, Director of the Football Division of FIFA revealing the mistake made in giving the wrong player the award.

FIFA wrote: “We made a mistake at the closing ceremony of the FIFA U-17 World Cup Chile 2015 with the distribution of the adidas Bronze Boot.

“Instead of player No. 8 of Nigeria, Samuel Chukwueze, the player Kelechi Nwakali (player No. 10 of Nigeria) received the adidas Bronze Boot. However, if two or more players are still equal (after goals and assists), the player who has played fewer number of minutes will be ranked first.

“With this in mind, adidas will send you another Bronze Boot in December 2015, which we would kindly ask you to hand over to Samuel Chukwueze. Please be informed that Kelechi Nwakali may keep his trophy.”

NFF.com reports that the abstract attached to the letter showed that while Nigerian Victor Osimhen scored 10 goals and made two assists to win the Golden Boot, Johannes Eggestein of Germany scored four goals to win the Silver Boot. Nwakali, who was voted Most Valuable Player of the Tournament and earned the Golden Ball, tied with compatriot Chukwueze for third place with three goals and three assists.