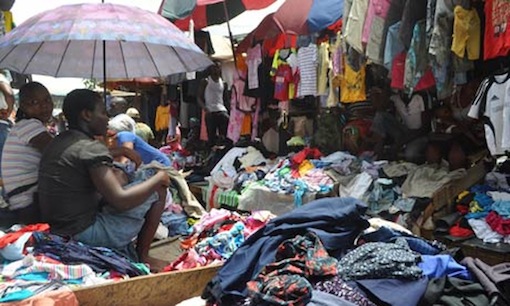 The Lagos State Government is to relocate markets along 1st, 2nd and 3rd gates in FESTAC to another location as the markets were located in illegal places.

Commissioner for Local Government and Community Affairs, Muslim Folami disclosed this on Thursday at a stakeholder’s meeting with leadership of the markets at the Government Secretariat, Alausa, Lagos, southwest Nigeria.

Folami had said he invited them to let them know of the intention of the government to eject them from the markets, and that apart from causing gridlock on a major roads linking the state with other countries in the West Coast, security report available to the government showed that the markets had become a hideout for hoodlums who stored dangerous weapons there with which they operate at night and also sleep there.

According to him, “that place is not the right place for you to have your market. Where you are occupying now is illegal and causing a lot of gridlock, hoodlums use that place to hide their weapons and use these weapons at night to harass people.

“The traffic is giving government a major concern. Government wants to have a free traffic. The task force officials have been there and they reported their findings to the governor. There are a lot of shanties there. It is a trunk A road that goes to Seme. It is an eyesore to have things like that on an international road of that nature.”

Folami added that the markets in the area “cause gridlock, the hoodlums hide guns there and they sleep there, you don’t know it, but intelligence report says they are there. We don’t want to see something that is dangerous to you and overlook it because this is your government and we are concerned about your safety. Boko Haram are moving over to this area from the North East and we don’t want what is happening there to happen here,” he stated.

Earlier, the stakeholders had appealed to the state government to give them an alternative place for their trade so that they could continue their business and also sustain themselves and families.

The Baba Oloja General, Amuwo Odofin, Alhaji Bolaji Yusuf pleaded for relocation to another place, saying that if they were ejected outrightly without an alternative place, their means of survival would crumble.

Yusuf said many people, including widows in their thousands relied on the market for their survival, saying that they normally take very good care of the environment and never allowed miscreants into the place.

The Iya Oloja, Alhaja Osinatu Adebayo said there were about ten markets in the area, saying that they had been trading in the area since 1977, while appealing to Governor Akinwunmi Ambode to reconsider relocating the markets.

Other traders such as Kennedy Dafe and Alhaja Fausat Bankole, who spoke, acknowledged the presence of hoodlums in the market but that they had internal security, including arrangements with Oodua Peoples Congress, OPC, for the security of the markets.

The Executive Secretary of Amuwo Odofin Local government, Deaconess Dupe Ojodu, said the markets constituted security threat in the area, adding that the markets were supposed to be on 6th Avenue.

“I appeal that the government should move them to a convenient, secure, comfortable and beautiful environment that would not make things difficult for them.”