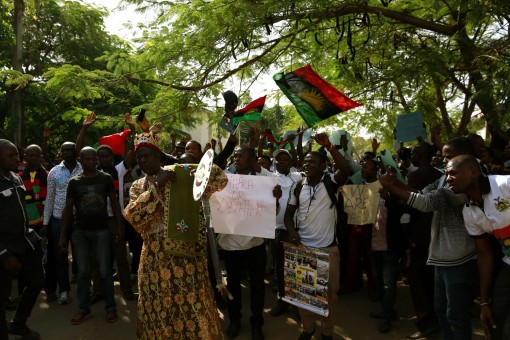 The Organization of Emerging African States (OEAS) has demanded that the Nigerian government conducts a snap referendum on Biafran self-determination within 90 days.

In a statement sent to PM News, OEAS noted that Biafra is a charter member of the OEAS, an international governmental organization that promotes self-determination and the end to colonial era boundaries in Africa.

“Today the people of Biafra are locked in an emerging struggle with the Nigeria federal government, the inevitable result of which will be self-determination for Biafra. Unfortunately the Nigerian government has resorted to summary execution and detention of Biafran patriots. The situation will surely escalate unless immediate action is taken,” the statement said.

It then called for the Nigerian government to meet the three following demands:

2. All federal military and police forces to stand down and return to their barracks.

3. A snap referendum on Biafran self-determination to be held within 90 days with OEAS, UNPO, and nonaligned observers supervising the balloting process.

“Failure to meet these demands will undoubtedly result in civil strife as non-violent Biafran protestors pay with their blood for their chance at independence. Regardless of what measures the Nigerian federal government may take, the die is cast for independence and Biafrans will not be deterred.”

“There is one chance for a peaceful referendum, a life line is being thrown to the Nigerian government which they ignore at their own peril.

“The Biafran people are patient but will not be indiscriminately murdered by the Nigerian government without resisting to the full extent of their human rights,” OEAS said.