China pledges $60b aid to Africa 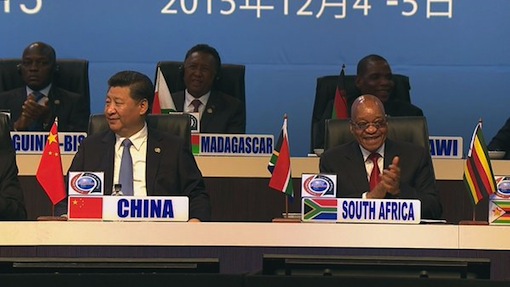 China’s President Xi Jinping told African presidents on Friday at a summit that his country would provide $60 billion over three years to fund development on the continent. $5billion of the aid would be interest free loan.

Xi, who is co-chairing the Forum on China-Africa Cooperation where several African heads of state were attending, outlined a broad ten-point development plan driven by the Asian economic giant, saying he wanted to build a relationship of equals.

“To ensure the successful implementation of these ten cooperation plans, China decides to provide a total of $60 billion of funding support,” Xi told the summit.

Despite its own slowing economy, Xi said China would step up investment in factories manufacturing goods for export in Africa, in addition to building roads, ports and railways on a continent long seen as a major commodities source for China.

China would cancel existing debts with zero interest loans for least developed countries that mature by end 2015, he said.

China will strengthen its cooperation with Africa in the fight against violent extremism and would not interfere with the political choices of countries in the continent, Xi said.

“China will implement ten cooperation plans with Africa in the next three years,” Xi said. “These plans (are) aimed at addressing three issues holding back Africa’s development, namely inadequate infrastructure, lack of professional and skilled personnel and funding shortage.”

Africans broadly see China as a healthy counterbalance to Western influence though Western governments charge China of turning a blind eye to conflicts and rights abuses on the continent as they pursue trade and aid policies there.