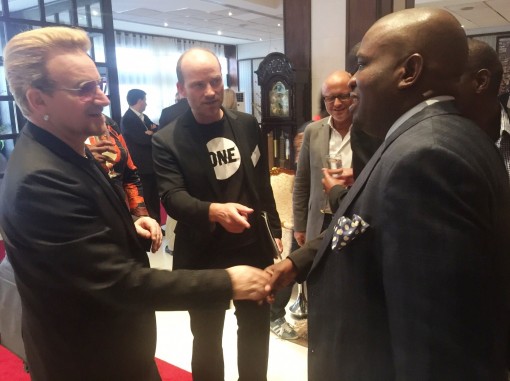 The co-founder of ONE Campaign, Paul David Hewson popularly known as ‘Bono’ has congratulated and commended AFRIMA for the successful hosting of The All Africa Music Awards, AFRIMA 2015 on Sunday November 15 at Eko Hotel and Suites in Lagos, Nigeria, especially for bringing Africa under one roof at this year’s award ceremony.

He made this statement at an interaction with the Managing Director of PRM Africa and Executive Producer, AFRIMA, Mr. Mike Dada, during the meeting of the Africa Policy and Advisory Board (APAB) members of ONE Campaign Africa and Mo Ibrahim Foundation high-level Annual Governance weekend at Labadi Beach Resort and International Conference Centre, Accra, Ghana recently. Dada is a member of APAB for ONE Campaign Africa.

Speaking at the Mo Ibrahim Foundation high-level Annual Governance weekend held on November 20-22, 2015 at the Accra International Conference Centre, Accra, Ghana, the Irish singer, songwriter, musician, venture capitalist, businessman, philanthropist and front man of Dublin-based rock band U2, Bono, who has been involved in benefits concerts to raise aid and awareness on the deplorable conditions of the poor in Africa stated, “I congratulate the All Africa Music Awards, AFRIMA, for a successful show and unifying Africa through music and pulling it off in spite of the challenges.”

This year’s topic focused on urban issues in Africa and the Leadership ceremony celebrated excellence in African Leadership which honored the 2014 Ibrahim laureate, His Excellency President Hifikipunye Pohamba, former President of Namibia (2005 -2015).

In his speech delivered on behalf of the International Committee of AFRIMA at the APAB conference, Dada reiterated AFRIMA’s commitment to work closely with organizations across Africa and the world at large to achieve the social change through creative arts and culture for Africa.

In partnership with the African Union, AU, AFRIMA, the continental awards is to celebrate, showcase and reward the musical culture of the African race and continued use of entertainment, culture, arts, music and the AFRIMA platform to project Africa’s greatness to the rest of the world.

There was a dinner roundtable with African business leaders and entrepreneurs.