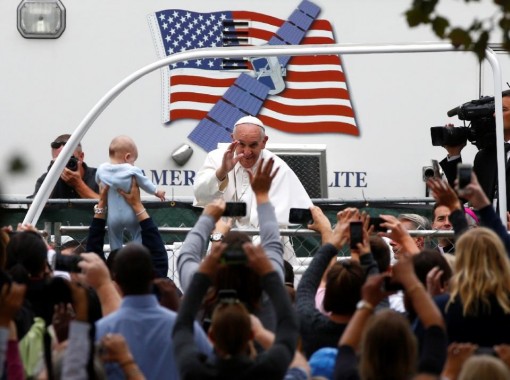 Pope Francis waves to people from the popemobile during a parade on September 27, 2015 in Philadelphia (AFP Photo/Tony Gentile)

Pope Francis would next week in Vatican inaugurate an 11-month festival “Jubilee of Mercy’’ aimed at reinforcing Catholic messages of openness and forgiveness.

Archbishop Rino Fisichella, President of the Pontifical Council for the New Evangelisation, a Vatican department that has taken a lead in organising the event, said this on Friday in Vatican City.

“In Vatican history, it is going to be the 30th Holy Year, a special period that usually attracts to Rome millions of pilgrims seeking a general pardon for their sins.

Fisichella said following a five-century-old ritual, Francis would kick start the Jubilee by opening the holy door of St Peter’s Basilica, in a gesture symbolically offering a path of redemption to pilgrims.

“Papal anticipated its formal launch on Sunday by opening a first holy door in Bangui, the Central African Republic, and has ordered at least one holy door to be opened in every parish around the world.

“This is offering the faithful the chance to make a pilgrimage closer to home.”

He said Francis had also announced the global dispatch of “Missionaries of Mercy,” who can issue pardons on his behalf, and granted all Catholic priests, rather than just bishops and selected prelates, the right to forgive what the church views as the grave sin of abortion.

The Archbishop said Dec. 8 start date falls on the “Feast of the Immaculate Conception’’, an important Catholic festival, and on the 50th anniversary of the Second Vatican Council, which ushered in major reforms in the 1960s.

Meanwhile, Prefect, Franco Gabrielli, Senior Municipal Official, noted that the influx foreseen Tuesday and in months to come has become a source of worry for Rome’s city officials.

He said fear was as a result of U.S. intelligence warnings issued in the wake of the Nov. 13 multiple attacks on Paris which left 130 people dead, that St Peter’s Square may be another terrorist target.

“The Islamic State extremist group which claimed responsibility for the Paris killings, has said in propaganda messages it aims to ‘conquer’ the Vatican.

“Look, on Tuesday four suspected Islamist’s allegedly targeting the Pope were arrested in Italy and Kosovo,’’ he said.

Gabrielli said a security plan foreseeing some 2,000 extra police and soldiers on the streets, as well as more CCTV surveillance cameras.

“In St Peter’s Square, new x-ray machines were installed to screen crowds as they enter the colonnade.

“Italian authorities have implemented a no-fly zone over most of Rome and have prepared a radar system to intercept and shoot down drones,’’ he said.

Gabrielli added that the Italian capital may come under less stress than anticipated, since Francis has transformed the Jubilee into a less Rome-centric event.