US opens all military combat jobs to women 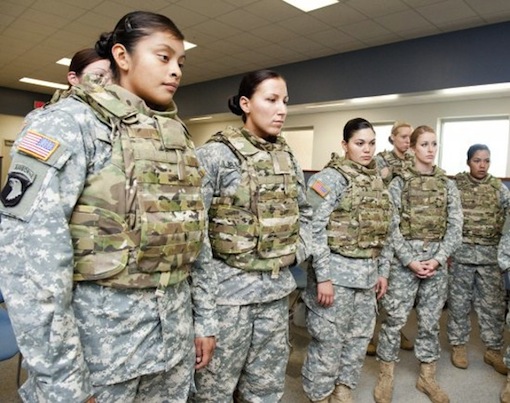 US women in combat

Ashton Carter, US Defence Secretary, on Friday in Washington, said the military would open all combat jobs to women, not minding the objections by the Marine Corps.

He said henceforth, women would be allowed to drive tanks, fire mortars, lead infantry soldiers into combat and serve in about 220,000 positions that had remained closed to them.

Carter said the decision to open all jobs to women followed years of study and after a review of recommendations from the Army, Navy, Air Force and Marines.

He said “only the Marines had asked for an exception to continue excluding women from some jobs.”

He added that as long as they were qualified and meet the standards, women would now be able to contribute to the US mission in ways they could not before.

“They’ll be able to serve as Army Rangers and Green Berets, Navy SEALS, Marine Corps infantry, Air Force parajumpers and everything else that were previously open only to men,” he said.

Carter said the move reflected the need to draw talent from the entire population to best serve the needs of modern military.

He said “women had already seen combat during the US wars in Iraq and Afghanistan but had continued to be excluded from certain positions labelled as combat roles.

“The military will have 30 days to open the positions and draft plans on how to include women in the force.”

The defence secretary expressed confidence that the policy could be implemented successfully and individual members of the military would be judged on their merits, not their gender.

There would be no quota for women to serve in certain roles or units, he added.

Carter said he believed concerns raised by the Marines that allowing women could result in more casualties could be addressed during the implementation of the policy and the military would be best served by integrating all services without exceptions.

Meanwhile, President Barack Obama had described the move as “another historic step.

“As commander in chief, I know that this change, like others before it, will again make our military even stronger.

“Our armed forces will draw on an even wider pool of talent,” he said.

A group of women in the military have expressed their pleasure toward the policy.

Judy Patterson, the Head of the Service Women’s Action Network, said the policy was a momentous decision in the history of the military.

She pledged that all military women would ensure that armed forces remained the strongest and most able.

“All qualified service members – regardless of their gender – will be allowed to compete for all combat jobs in 2016.

The Pentagon announced in 2013 that it would open combat positions to women, and the U.S. Army, Navy, Air Force and Marines released plans to open occupations such as infantry, armour and special operations by 2016.

The military had gradually been opening many of those positions to women, including allowing them to serve on Navy submarines and in Army infantry units.

The military has since then also been studying how to open elite fighting units, such as the Army Rangers and the Navy SEALS, and weighing whether some positions should continue to exclude women.