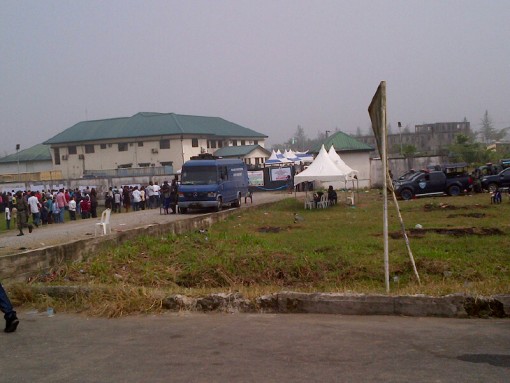 Security operatives at the entrance to INEC office in Yenagoa ahead of Bayelsa election.

The Special Adviser to the Bayelsa State Governor on Inter-Party Matters, Austin Adigio and three other members of the Peoples Democratic Party (PDP) in Okpoama and Eweama communities of Brass Local Government area of the State today suffered a bloody machete attacks ahead of the Saturday governorship election.

Also reports have it that the Deputy Ward Chairman of APC in Ward 1 in Odi Local Government Area of the State, Diseye Dickson was killed on Wednesday by unidentified gunmen.

The deceased Dickson was reportedly shot dead in Odi community at about 11pm on Wednesday by the gunmen who were reportedly dressed in military uniform.

It was gathered that Adigio, who served as Personal Assistant to Chief Timipre Sylva and recently decamped to join Seriake Dickson’s administration, was attacked by several armed youths.

Though other members of PDP in the area were attacked with machete by suspected supporters of the APC, the source claimed the attackers warned those who are not members of the APC to leave the community and forget the election.

The Director of Media and Publicity of the Restoration Campaign Organisation of PDP, Jonathan Obuebite, said the attack in Okpoama and Eweama is one among the series of attacks unleashed by the APC against the members of the PDP across the state.

According to Obuebite, “we condemn the attacks on our members in Eweama and Okpoama communities. We call on relevant security agencies to investigate the incident and bring the culprits to book. Nobody has the monopoly of violence. If the APC-led Federal Government fails to put a stop to this wanton display of federal might and sheer brigandage and violence being unleashed on us by APC in Bayelsa State, we will be helpless if our members resort to defending themselves. And in that circumstance, the outcome will be too disastrous for the Federal Government to handle. The Federal Government should be alive to the responsibility. Nobody, no matter his position, abuses his office to support lawlessness.”

A source in the community said the attackers were not members of APC but some PDP thugs who were not paid, and in retaliation they attacked their leader, Austin Adigio who is a cousin of Sylva.

Meanwhile, a version of the report claimed that the deceased suspected APC member was killed during a shoot out between policemen and the gunmen, numbering about Eight, in a failed kidnap attempt on Chief Watson Ogoriba, a businessman and Senior Brother of the former mMember of the Federal House of Representatives, Warman Ogoriba.

Another source in the local government area said, “It was the case of failed kidnap attempt. It is not about PDP or the APC. When the kidnappers arrived the community, the vigilante people alerted the Police at Kaima Divisional Command and they engaged the suspected kidnappers in a shoot-out. The victim may have been caught in a cross-fire.”

A member of the Federal House of Representative representing Yenagoa/Kolokuma/Opokuma Constituency, Douye Diri, who confirmed the incident, saying it was a case of foiled kidnap attempt, “it was not a party conflict.”

But the leadership of APC in the state speaking through the Sylva/Igiri Campaign Organisation alleged that the killing was carried out by suspected thugs hired by the PDP.

The Director of Media and Publicity of the Campaign Organisation, Chief Nathan Egba, stated that “As at this morning, the corpse of Mr. Dickson, was still lying where he was killed.

“Do note that this is the second killing being carried out by the PDP since the campaigns started. Recall that Mr. Andrew June, a ward chairman of our party in Ekeremor LGA was macheted to death. We condemn this act of desperation by the PDP to continually attack and intimidate our supporters.”

When the Bayelsa Police Command Public Relations Officer Asinim Butswat, an ASP, was called on his cell phone to react to the report, he did not respond. He left a text message: “Please I am in a crucial meeting.”