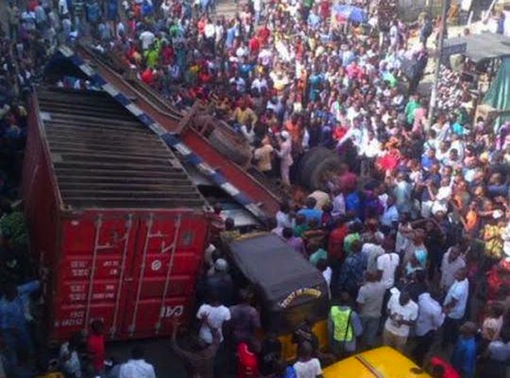 FILE PHOTO: Scene of an accident involving a container at Ojuelegba, Lagos.

At least four houses and five vehicles have been burnt as another fuel tanker fell off Ojuelegba bridge, in Lagos, western Nigeria, spilling its content and bursting into flame.

The tanker belonging to Forte Oil was ascending the bridge in the early hours of Saturday when the incident occurred.

The tanker was said to have spilled its content heavily on the road and into drainages in the areas.

Efforts to prevent the spillage from resulting in fire proved abortive as the tanker burst into flame which spread to four houses and burnt five cars.

There was pandemonium as residents fled their houses to avert being burnt to death. The fire spread through the drainages into the affected houses.

General Manager, Lagos State Emergency Management Agency, LASEMA, Michael Akindele told P.M.NEWS that the incident occurred around 2:15am while the tanker was ascending the bridge.

Akindele who said no life was lost, confirmed that one house was completely razed while three others were partially burnt, adding that five vehicles were also burnt in the inferno.

He thanked God that the tragedy occurred at night, saying that lives might have been lost if it had occurred in the day time.

Akindele appealed to tanker drivers to be extremely careful while conveying such sensitive and inflammable products, adding that vehicles used in conveying such products must be roadworthy.

Director, Lagos State Fire Service, Rasak Fadipe, said the tanker was conveying 33,000 litres of petrol when the accident occurred, saying that his men were swift to respond when they were informed about the accident.

There was traffic gridlock in Ojuelegba as LASEMA officials and others battled to remove the wreckage of the tanker from the road.