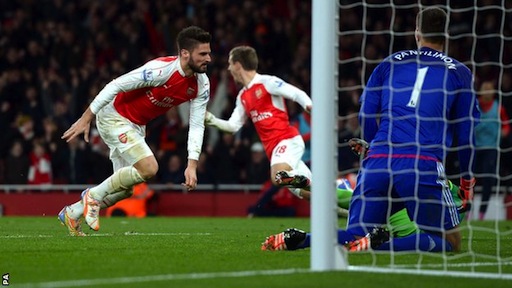 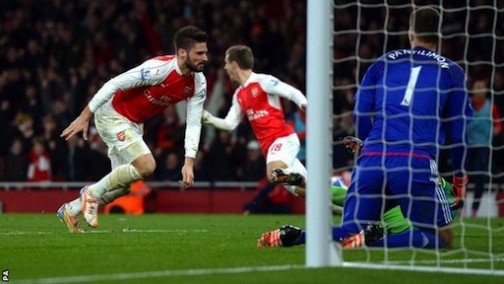 Olivier Giroud scored for both teams as below-par Arsenal battled past Sunderland to end a run of three Premier League games without a win.

Arsenal were poor for long periods, but led when Joel Campbell finished from a Mesut Ozil through ball.

Sunderland deservedly levelled through a free-kick that Giroud deflected into his own net.

But Giroud made amends with a header from virtually the same spot, before Aaron Ramsey scrambled a late third.

Sunderland, who could be dragged back into the relegation zone depending on the results of Bournemouth and Newcastle, can rightly feel hard done by after a performance of both disciplined defence and incisive attacking play.

Arsenal were hampered by the absence of both Santi Cazorla and Alexis Sanchez and looked ponderous going forward, while a shaky defence was indebted to the excellence of goalkeeper Petr Cech.

Still, they climb to second in the Premier League, two points behind leaders Leicester.

Giroud’s performance was almost Arsenal in microcosm – the own goal an error caused by Sunderland pressure, but ultimately enough quality to secure a victory that was barely deserved.

A lacklustre first-half display looked set to be behind the Gunners when Campbell finished a seven-pass move underneath the on-rushing Costel Pantilimon.

But they were ahead for only 12 minutes as the impressive Duncan Watmore won a free-kick on the left that was swung in by Yann M’Vila and accidentally steered home by the leg of Giroud.

Arsenal showed little sign of improving in the second half, but, as in the first, one flowing move was enough to cut through an otherwise organised Sunderland defence.

Nacho Monreal was heavily involved as Arsenal came down the left, with Giroud stooping to head Ramsey’s cross into the same part of the net he erroneously found in the first half.

The third, in the dying moments, was harsh on a Sunderland team looking for an equaliser. With visiting defenders outnumbered, Ramsey pounced to leave a scoreline that did not reflect the contest.

With so many players out injured, Arsenal needed their most experienced men to perform and Ozil and Cech delivered.

Virtually all of Arsenal’s attacking play went through Ozil, but it was the performance of Cech that was perhaps most telling.

He made saves from Fabio Borini and a Mathieu Flamini deflection in the first half and, most importantly, brilliantly denied Steven Fletcher in the second.

As Fletcher arrived at the back post from a corner, Cech moved across his goal to stop the ball virtually on the line. Moments later, Arsenal were ahead.

Sunderland arrived at the Emirates on the back of two wins and two clean sheets.

While they defended with nine behind the ball, that also carried an attacking threat, particularly through the industry of Watmore – indeed, Arsenal ended with six defenders on the pitch.

Making only his second Premier League start, the 21-year-old not only did his defensive duties but regularly had the legs to get up in support of Fletcher.

He won the free-kick that resulted in Sunderland’s goal and also, with the score still at 2-1, got behind the Arsenal defence only to fire a tame shot straight at Cech.

And, while it was Watmore who impressed, the Black Cats demonstrated that Sam Allardyce has brought both enough solidity and potency to suggest that fight against relegation can be won.