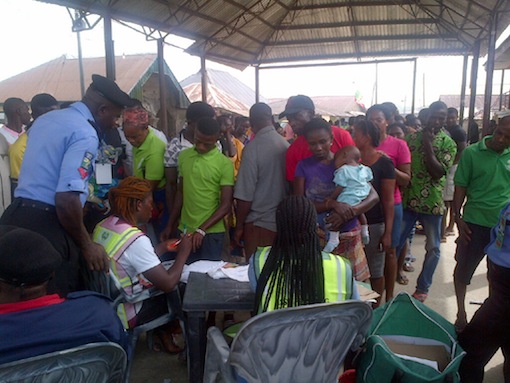 Eligible voters on queue for accreditation at a recent election

The people of Ogbia local government area of Bayelsa State trooped out in their numbers this morning to elect candidates of their choice in the governorship election.

Accreditation of enthusiastic voters were very much in progress in most parts of the local government area.

An ad hoc official of INEC who spoke to journalists at Elebele town, confirmed that voting materials arrived late owing to logistic problems.

She said full accreditation of eligible voters finally began at about 9:30 am.

Former President, Goodluck Jonathan was said to have just completed his accreditation (at about 9.45 am) when our correspondent arrived at ward 13, Unit 39 in Otuoke town.