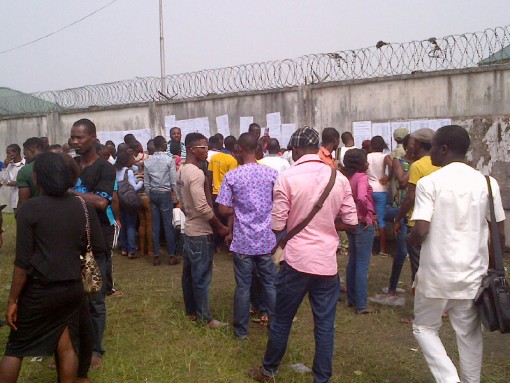 Accreditation of voters for the supplementary governorship election in 91 polling units in Kogi has commenced amid peace.

A correspondent of NAN reports from Ayangba, in Dekina Local Government Area of the state that accreditation began at 8:40 a.m.

At Ofejikpi polling unit 013 in Ayangba, one of the two card reader machines being used for accreditation developed a fault, but the electoral officials present said that a new one had been sent for.

The turnout for the accreditation was low compared to what was recorded on November 21 in the area.

A similar situation prevailed at Ojikpadala and Egume areas of the local government.

The situation was the same in Olamaboro Local Government Area, where a small number of voters were seen turning out for accreditation, which began at 8:15 a.m.

A few voters, mostly male, were seen at the polling units in the area to exercise their civic right.

However, the situation was different at the six polling units in Okene and Adavi Local Government Areas as voters turned out en masse to cast their votes.

Political observers, who spoke with NAN on the attitude of voters in the two council areas, attributed the large turnout of voters as a mark of solidarity with the All Progressives Congress governorship candidate, Mr Yahaya Bello, by the Ebira people.

Bello hails from Okene Local Government Area of the state.

NAN further reports that security has been beefed up at all the polling units visited.

Policemen, men of the Nigeria Security and Civil Defence Corps, and immigration officials were seen in strategic locations vigilantly watching as people moved in and around the polling units.