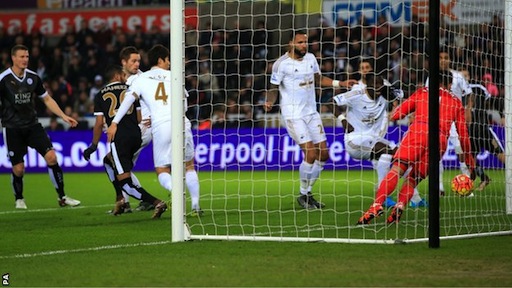 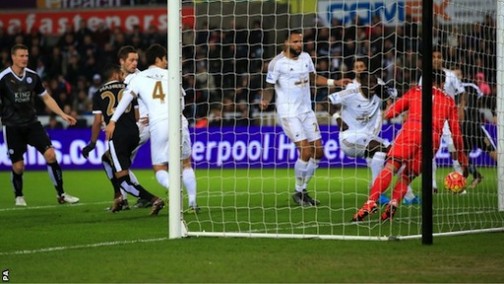 Riyad Mahrez’s hat-trick propelled Leicester to the top of the Premier League as they beat Swansea to increase the pressure on manager Garry Monk.

Mahrez headed the Foxes in front after five minutes and fired in calmly for his second, although he seemed offside.

Swansea’s Ki Sung-yueng headed against the bar after the break, but Mahrez finished an incisive counter-attack to seal his first ever hat-trick.

Manchester City’s defeat by Stoke sees Leicester leapfrog them at the summit.

This result leaves the Swans, 15th in the league, four points above the relegation zone, having won only one of their last 11 league matches.

Manager Monk’s position had already been under intense scrutiny and, having heard his side booed for a second successive home game, there will be more doubts than ever about his future.

But while Swansea fall short of their expectations, Leicester continue to defy all predictions by jostling with Manchester City at the Premier League’s summit.

The pre-match attention was inevitably focused on Leicester’s Jamie Vardy, who had set a Premier League record by scoring for an 11th successive game against Manchester United.

But the former Fleetwood striker had to settle for a supporting role as Mahrez took centre stage.

Both the Algerian’s first two goals were fortuitous, but they were no more than Claudio Ranieri’s side deserved for an utterly dominant first half.

Mahrez’s opening goal was a scrappy one, the ball flicked on from a corner and appeared to hit his head and arm before trickling over the line.

The 24-year-old’s second was a more conventional finish – confidently swept into the bottom corner – but he seemed to be offside from N’Golo Kante’s pass.

While Leicester’s delirious travelling fans sang about being top of the league, a sense of dread and agitation spread among the home supporters as Swansea were booed off at half-time.

Piling the pressure on Monk

Monk said his players were affected by the “tension and anxiety” of the Liberty crowd when they fell behind 2-0 to Bournemouth a fortnight earlier.

But whereas the Swans recovered to draw 2-2 against the Cherries, they looked like cannon fodder for Leicester.

Centre-backs Ashley Williams and Kyle Bartley seemed nervous, the latter needlessly conceding a corner for the opening goal and presenting Vardy with a glorious chance to score for a 12th successive game.

Their unease extended to the rest of the team, with Swansea struggling to keep possession or create any opportunities of note.

And it will have been the dismal performance as much as the result which will compound the concerns of an already worried Swansea board.

Manchester City’s defeat to Stoke had presented Leicester with the opportunity to reclaim their place at the top of the table and, as Ranieri’s men have done so often this season, they seized the moment.

The Foxes were barely tested by a dreadful first-half showing from Swansea, but they were incisive and clinical when they needed to be.

Monk’s men posed more of a threat after the interval, with Ki heading against the bar and Gylfi Sigurdsson’s whipped shot hitting the post.

But Leicester were still in control and they eliminated any slim chance of a Swansea revival when a swift counter-attack involving Leonardo Ulloa and Vardy was finished by Mahrez’s low, firm shot.

Leicester are now two points clear at the top of the table and, with the busy festive period looming, they find themselves in the unlikely position of being early title challengers.