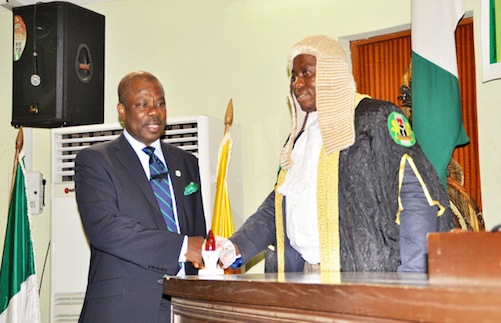 
In consonance with the provisions of Section 121, sub-section II of the 1999 Nigerian Constitution (as amended), the Ogun State House of Assembly will next week Monday play host to Heads of Ministries, Departments and Agencies, MDAs of the State Government which will defend 2016 appropriation bill.

In a release on Friday by the Clerk of the State House of Assembly, Mr. Muyiwa Adenopo, the budget defence would be declared open by the Speaker of the House, Rt. Hon. Suraju Ishola Adekunbi.

The defence is expected to be held at the Conference Room, Room 215, Assembly complex, Oke Mosan, Abeokuta by 10:00 am.

The defence, according to the release, would be conducted through the various Standing Committees, which is to be presided over by the Chairman, House Committee on Finance and Appropriation.

The release enjoined all Ministries, Departments and Agencies, MDAs of the state government to keep to their schedule for the yearly exercise.