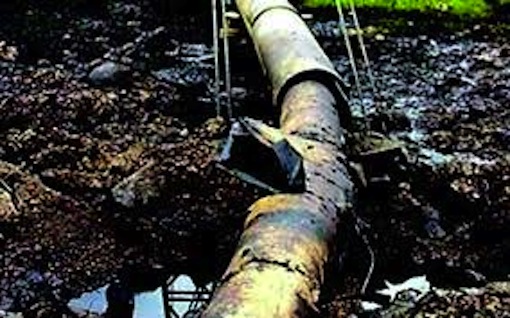 NAN reports that this is coming barely two weeks when the same pipeline exploded and burnt the Mammy market close to the 3 Battalion, Effurun.

Some eyewitnesses said the explosion occurred as result of spillage from the corroded pipelines and the resultant fire burning property in the area.

Mr Samson Osas, an eyewitness, said the Sapele dual carriageway where the mechanic site was located was filled with crude oil spill on Thursday.

He added that the development attracted officials of the NNPC who came to drain the products.

“We woke up on Thursday morning and discovered crude oil flood along this Sapele road.

“Of course that same morning, NNPC brought about three fuel tankers to drain the oil.

“At about 9:00 am (Friday), there was fire. It had spread everywhere. No life was lost, Soldiers have been on guard since Thursday’’, he said.

Another eyewitness said more than 15 vehicles and several shops were consumed in the inferno, adding that a bus owner lost his vehicle to the flame.

“The bus owner parked his new Toyota Hiace to buy something and it was engulfed in flame before he returned.”

He appealed to the people to see the pipeline as national asset that should be protected by them. “About two weeks ago, we had a similar problem and we are still trying to remediate the environment before this, it is not good,” he said.