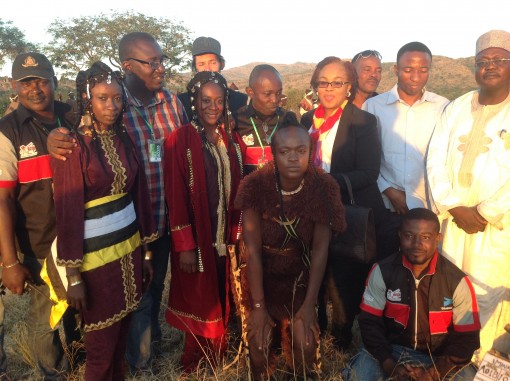 Queen Amina, a story of the historical Hausa Muslim warrior queen and a new film project financed by Bank of Industry, BOI, is currently shooting in Jos, the Plateau State capital, northcentral Nigeria.

The movie, being produced by Okey Ogunjiofor, a pioneer Nollywood filmmaker and producer of the landmark flick, Living In Bondage, is a product of the BoI Nollyfund (BNF) scheme, an initial programme limit of N1 billion in single-digit interest loans.

Directed by Izu Ojukwu, Queen Amina is the second of Nollyfund film project that is currently in production; Kunle Afolayan’s The CEO which also benefitted from the loan began shooting three months ago – and like The CEO, Queen Amina project also got N50 million from BoI.

Ogunjiofor, who produced Living In Bondage in 1992, is optimistic that although his next major project is coming 20 years after, it would make him more prominent than his first movie.

“I have researched the story of Queen Amina in the last 20 years, and I’m glad that the opportunity to bring it to life has finally come,” he said.

Through its support policy for the creative sector of the economy, BoI had in the past financed films such as Biyi Bandele’s Half of a Yellow Sun and Michelle Bello’s Flower Girl.

In its first roll-out, Nollyfund has already approved more than 12 movie projects, with another film, Ayanma, from the Emem Isong-led Royal Arts Academy, coming after the wrap up of Queen Amina.

Two officials of the bank, Mrs. Cynthia Nwuka, Group Head, Creative Industry and Mr. Okechukwu Madu, Assistant Manager were at Shere, Plateau State last weekend to show support to Ogunjiofor and his team, who at that moment were shooting a war scene that had over 200 people at the desert location.

Nwuka and Madu arrived the location in the company of veteran Hausa actor and member of the Advisory Board of NollyFund, Alhaji Sani Muazu, and were taken on inspection of the state-of-the-art equipment, soundless generating set, location vans, original props and period costumes among others.

Nwuka encouraged Ogunjiofor to be steadfast despite the challenges he might encounter in the course of the movie.

“You are likely to encounter some challenges as it is with every production. But when that happens, let us know on time so that we can join hands to block it and move on. Before we got to this level with the Nollyfund, it wasn’t easy,” Nwuka disclosed.

She added, “I have always said that if Kene Mparu of Filmhouse did not prove that what we are experiencing with Nollywood is possible, if Kene didn’t run with this assignment, we won’t be where we are today. So we should make it possible so that others coming behind can take it further.”

Ogunjiofor described the cast and crew as die-hard people who would surmount the challenges of the terrain to ensure a successful output.

“We are working, and I can assure you that when you see what we have done, you would beat your chest and say we are in the right direction,” he said.

On the composition of the actors, Ogunjiofor said he is using all-Northern cast to tell this story.

His words: “I’m using a mixture of Nollywood and Kanywood to build a bridge. What I did for Nollywood in the South that has created a huge industry is what I’m transferring to the North. So when I leave the North after this production, the North will never be the same again because all the people we have trained now on how to ride horses and fight with the sword are not Igbos neither are they Yorubas. They are all from this side and these skills are with them now.

“We are doing this film right in their presence and a lot of them are getting trained at the same time. So, when we leave they won’t go back to doing less of what they are doing now and I am happy that the superstars of the North are all here,” he said, referring to the likes of Ali Nuhu and Sani Danja.”

Queen Amina is a thrilling epic movie about the most charismatic warrior, sovereign and queen in the history of Africa who was fathered by the legendary warrior, expansionist, and empire builder, Barkwa Turunku.

The movie tells the story of Amina, who lived in the age of man in a man’s world.

In an ancient world of brutal conflicts, ferocious animal passions, suppressive timeless customs, and reckless, herioc exploits, she must resolutely carve out a path for her life in the face of scandalised tradition and antagonistic male dominance. To grasp her destiny, she must prove herself not just as able, but infinitely more capable than any man alive.

Amina, alluring princess and first daughter to the renowned Barkwa, nurses a burning ambition never before imagined: To sit as queen over a Zazzau empire that stretches from Kano to River Niger, from Idah to Jukunland.

In an age of female subjugation and an oppressive, male sponsored traditional system, no sane woman would dare conceive such dreams; and only the most foolishly reckless would move on to attempt actualisation.

“The movie chronicles the many lives of this exceptional woman; the pain and the agony caused by the betrayal of cherished lovers; the ferocious savagery in the face of all battles and enemies; the cunning manipulation at will of the nobles and sovereigns of kingdoms; and the tender concern over the down-trodden Talakawasor common people,” Ogunjiofor noted.