#BayelsaDecides: All the results from INECs collation office - Live Blog 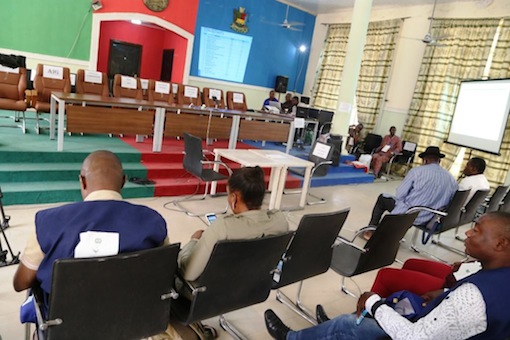 The Independent National Electoral Commission (INEC) has postponed the announcement of results until 10:00am on Monday. There some real anxiety at the coalition centre but very peaceful thus far.

Pictures from the collation centre in Yenagoa, Bayelsa State.

The All Progressives Congress agent is challenging the results of Sagbama local government, noting that, Card Readers were not used in the LGA. APC polled 5,382 against PDP’s 28,934.

There are loads of people outside INEC’s head office in Yenagoa, Bayelsa state capital, most of them anxious to know who will lead the state for the next four years after most of them casted their votes yesterday.

The Peoples Democratic Party candidate and incumbent governor, Seriake Dickson is in the lead but not a very comfortable one, after results from three local government areas were announced.

Timipre Sylva, candidate of the main opposition party, All Progressives Congress will hope other LGAs favour him.

Announcement of polls results about to commence

The much anticipated announcement of the results of the gubernatorial election in Bayelsa state is about to commence in Yenagoa.
The venue of the announcement which is to hold at INEC collation centre, located at Charles Agulata Crescent, Yenagoa, the state capital, is surrounded by fierce-looking men of bomb disposal unit and other operatives of Nigerian Police.

All going into the hall, including party agents, journalists, INEC staff and others are thoroughly searched at the entrance to the hall.

As at the time of filling this report, it was reliably gathered that returning officers from seven of the eight local government areas were ready, while results from Southern Ijaw local government where election was postponed till today, were being awaited.