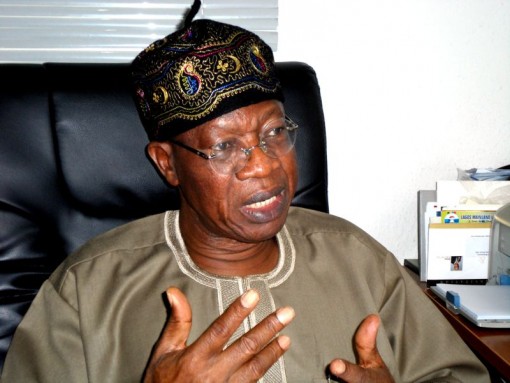 Minister of Information and Culture Lai Mohammed has appealed to leaders in the country not to exploit the economic situation to further destabilise Nigerians.

Mohammed made the call at the News Agency of Nigeria (NAN) Forum in Abuja at the weekend.

He also urged Nigerian leaders to be courageous enough to come out and defend the unity of the country even though “in the short term it might be politically fashionable for them to be on the side of some agitators”.

The minister, who noted that current agitations by citizens were “completely legitimate”, assured of the Federal Government’s commitment to strengthening the economy.

“There are many political frontlines in Nigeria, religious, ethnic and the like but these things do not come to the fore until when there are serious economic problems like we are having today.

“I have listened to the complaints of many of these agitators and right down it is economic.

“They must understand too that but for this furtiveness of this administration, this country would have been by far much worse.

“There is need for Nigerians to understand also that these are not ordinary times and that the government is not just making excuses.

“I appeal to our leaders not to exploit this situation to further destabilise Nigerians; our leaders should be courageous enough to come out and defend our unity.

“In the short term, it might be politically fashionable for them to be on the side of some agitators but in the long term, it is in the overall interest of Nigeria that we all understand our differences, respect them forge a united Nigeria.

“There will be no alternative to one united Nigeria.”

The minister emphasised the need for government to have accurate and timely information on complaints presented by citizens.

“The most important thing is that the government must do a lot of self-assessment itself.

He also stressed the need for the government to take advantage of different media platforms to make accurate information on its policies and plans available to citizens at all times.

He said that the availability of timely information would curtail agitations, rebuff rumours, and enhance citizens’ understanding of government’s plans and policies.

The minster urged the media to take advantage of available opportunities to “dominate” the social media platforms with positive and accurate information about the country.

He further said that such dominance would pre-empt negative information and activities on such platforms.

“At times some of the agitations might be because the government is not adequately publicising what it is doing.

“Some of the agitations could also arise from lack of understanding of government policies.

“Unfortunately, we have allowed the social media to dictate the agenda for us; that must stop immediately.

“If, for instance, we dedicate platforms that churn out positive stories, very soon other negative platforms become irrelevant.

“It is only the absence of an alternative narrative with the correct information that makes such other platforms relevant.”

He stated that churning out accurate information will present a positive image of Nigeria to the international community.