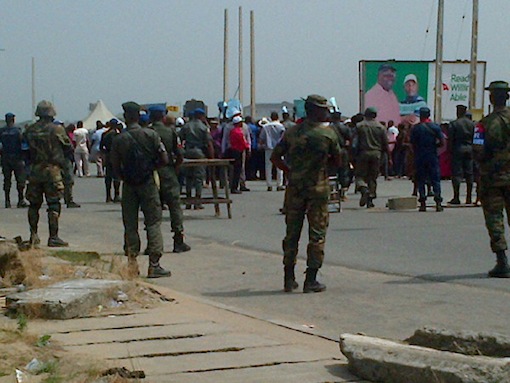 Despite police ban on processions and demonstrations in Bayelsa state, hundreds of PDP supporters , men, women and youths, took to the streets of Yenagoa, capital of Bayelsa state in protest of what they called ‘military hijack’ of the electoral process.

Messages on some of the placards read: “we need peace; we say no to evil; military, stay away from politics; leadership is about building, not destroying.”

Security agents stationed in front of the State High Court, had a difficult time putting them under check as the angry protesters insisted on going into the collation centre, dead or alive, to see INEC officials. 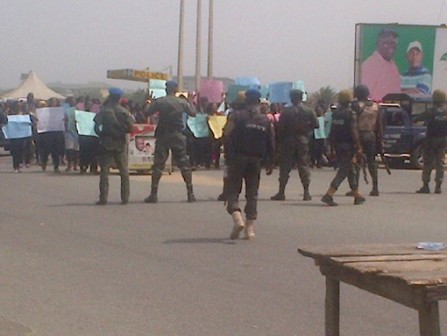 Not even reinforcement from operatives of the Nigerian Army deter the determined protesters who alleged that military operatives hijacked electoral process in the Southern Ijaw and Nembe local government areas.

As at the time of filing this report, senior police officers were still appealing and. Negotiating with the protesters who insisted that only INEC commissioner must come and address them.

The PDP candidate, Governor Seriake Dickson, in the results declared so far, has won five of the six local government areas. His opponent, the APC candidate, Timipre Sylva has won in one.

The outstanding results are from Nembe and Southern Ijaw councils. The latter has over 120,000 registered voters and is said to be the stronghold of Sylva.