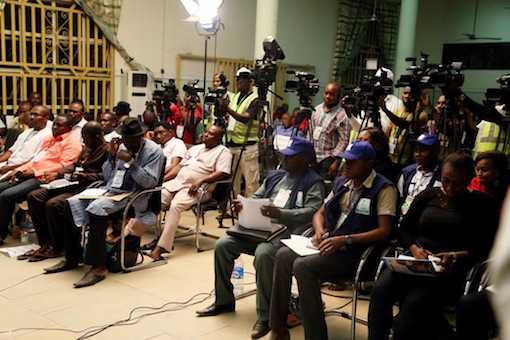 Members of the press and some observers during the Bayelsa polls.
Photo: Idowu Ogunleye

Prof. Zana Akpagu, the Chief. Returning Officer of Bayelsa state gubernatorial election has announced that collation of results from the remaining two local government areas would continue after the results have been received.

The results are expected from Nembe and Southern Ijaw local government areas.

Earlier, in the result of Ogbia Local Government Area announced Monday, candidate of the PDP in the election, Governor Seriake Dickson, polled a total of 13,051 votes against the 9,106 votes of Timipre Sylva, candidate of the APC.