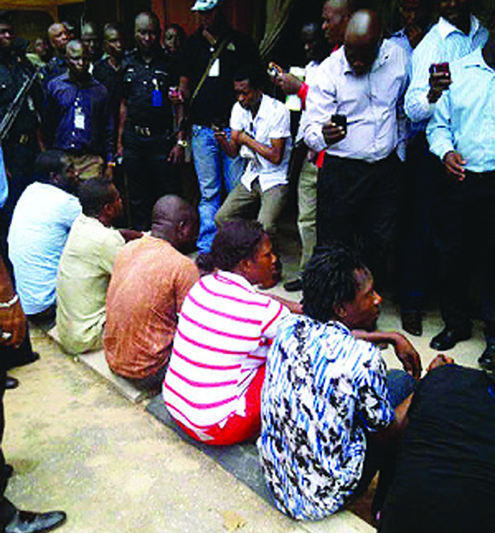 Some arrested kidnappers. They have found in Ogun State a good hunting ground.

A building contractor, Engr. Adewale Akindehinde was at the weekend abducted by some unidentified gunmen in Ijebu Ode, western Nigeria.

He hails from Abobi Quarters, Ago Iwoye in Ijebu North Local Government Area of Ogun State.

Also abducted alongside the contractor was his wife, whose name could not be ascertained as at the time of filing this report.

A family source, who pleaded anonymity told our correspondent that the man was later released that night but his car and his wife were taken away.

The source confirmed that the kidnappers have contacted the man demanding a ransom of N10 million before his wife could be released.

According to the source, “Engr and his wife left home around 7:00 pm to get something and left their baby with his mother in-law. Unknown to them, they were being trailed by their abductors.

“They kidnapped and later dropped Engr by the roadside while his wife was taken away with his car.

“The kidnappers have put a call across to him, asking him to cough out N10 million as ransom to be paid before his wife would be released.

“This is too much, where do they expect him to see such huge amount of money? Where is the money? We all know what is going on in this country now, so, we are appealing to these people to release this woman as her baby has missed her a lot.”

Our correspondent reliably gathered that one of the man’s staff was around this time last year kidnapped and was released after the man had paid a big ransom.

The man, according to findings, is a building contractorwho works mostly in the northern and eastern parts of the country.

Efforts to speak with the man proved abortive as he is not ready to make any comment.