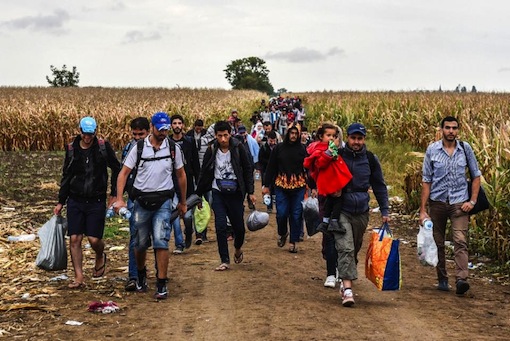 Migrants walk on a dirt road towards the Serbia-Croatia border, near the western-Serbia town of Sid, on September 20, 2015 (AFP Photo/Armend Nimani)

Arson attacks on refugee shelters, assaults, swastikas sprayed on walls — as Germany has taken in record numbers of asylum seekers, it has been rocked by a xenophobic backlash which authorities have appeared unable to stop.

With one million arrivals expected in the EU’s most populous nation this year, about half of them from Syria, Chancellor Angela Merkel has rallied Germans to welcome the newcomers and vowed to crack down on hate-mongers.

While vast numbers of Germans have volunteered to help refugees, there has also been a rise in anti-foreigner sentiment that has buoyed the populist and anti-immigration Alternative for Germany (AfD) party.

In September, Merkel — who herself had endured xenophobic protesters’ ugly verbal slurs during a visit to a migrant shelter — vowed that attacks targeting asylum seekers would be punished “with the full force of the law”.

Yet, according to a survey by news weekly Die Zeit, of the 222 most serious attacks on shelters reported this year, only four cases have resulted in convictions so far.

“If the state really wants to ‘act with the full force of the law’, it should do considerably more,” the newspaper asserted.

Die Zeit pointed to insufficient resources dedicated to investigations but also a frequent lack of solid evidence, as many shelters are located in thinly populated areas.

“The fact that there have been no deaths yet is plain luck,” said Timo Reinfrank of the Amadeu Antonio Foundation, which works to counter neo-Nazism, right-wing extremism and anti-Semitism.

Racist attacks in Germany have multiplied especially since the summer, which saw a massive surge of hundreds of thousands of asylum seekers arrive via the Balkans and Austria in just a few weeks.

From June to September, Germany recorded an average of three xenophobic acts a day against asylum seekers’ facilities, according to government figures provided to lawmakers.

“This violence is not only committed by neo-Nazis,” said Reinfrank. “It is perpetrated increasingly by supposedly ‘concerned citizens’ who give vent to their racism.”

At Crimmitschau in the former communist East Germany, three people were detained last week for throwing Molotov cocktails in November at the walls of a shelter where 45 people were sleeping, including 20 children.

In Eggesin, another town in the east, two Afghans were assaulted in the past week.

These crimes are but the latest in a long list collated by two organisations helping refugees, Pro Asyl and the Amadeu Antonio Foundation.

Every day, they say, somewhere in Germany a hate crime has been committed, ranging from insults hurled at migrants, to swastikas daubed on a shelter, to street protesters trying to block a bus carrying refugees.

Fanning the flames, and raging against Muslims, has been the far-right street movement PEGIDA — short for “Patriotic Europeans Against the Islamisation of the Occident” — which has drawn thousands to weekly rallies in the eastern city of Dresden.

In parliamentary politics, senior members of the AfD have openly voiced sympathy for PEGIDA’s goals and seen support rise above 10 percent in many polls.

Authorities and non-government groups fear that things may get worse in the wake of the November 13 attacks in Paris, despite their pleas not to confuse Syrian refugees and jihadists.

He said “it blames the policies and the chancellor and even the media” and argues that “the open borders policy is the cause of what is happening”.

With several regional elections on the calendar in 2016, including two in eastern states, some fear a right-wing populist breakthrough at the ballot box, a year before national parliamentary elections.