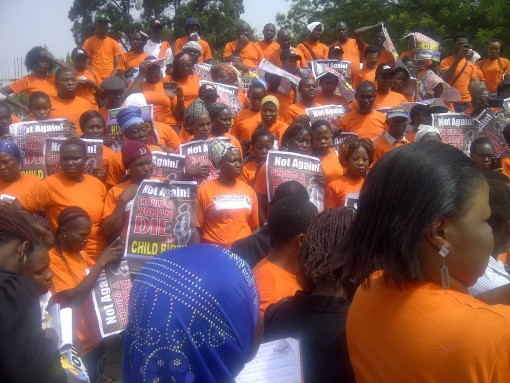 File photo: Women protesting over maternal deaths in Lagos at the Lagos State House of Assembly on Monday, 7 Dec. 2015 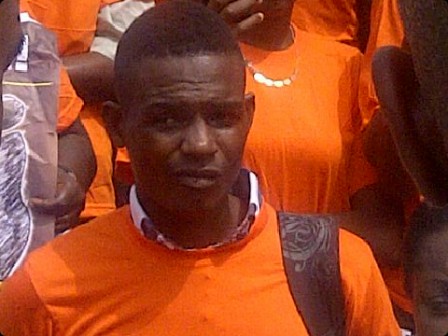 The Women Advocates Research and Documentation Centre, WARDC, on Monday stormed the Lagos State House of Assembly demanding for a probe into the 26 October incident at the Rauf/Aregbesola Health Centre in Mosan Okunola Local Council Development Area, Alimosho area of the state that led to the death of a woman who was in labour.

As it was very early, even his shouts could not get the nurses on duty to come to his wife’s aide.

According to him, one of the hospital staff who came to him, asked him to take his wife to another hospital. Explanations that his wife was registered with the hospital fell on deaf ears.

Confirming the incident on behalf of the group, its director, Dr. Abiola Akiyode-Afolabi, said the woman arrived at the hospital, where she had registered for antenatal care at 5am, but met the gates locked and without any medical attention, she gave birth in the car.

It was after she gave birth in the car that the much-needed medical attention came, but at this stage, she had lost a lot of blood.

The group also recalled how Mrs. Obinna Nnanna died at the Lagos State General Hospital, Gbagada, after giving birth to triplets on 23 September, 2015.

In another incident also, this time, at the Lagos State University Teaching Hospital, LASUTH, the protesters said in the petition that Mrs. Oduyoye Folake died after she was detained for three months for failure to pay her hospital bills.

The protesters said further that there were several reports of people being denied access to medical attention in hospitals in the state for failure to bring their spouses for compulsory blood donation.

In the petition addressed to the Speaker of the House, Mudashiru Obasa, the group said that its findings have shown that despite government’s efforts towards the reduction of maternal death in the state, women still experienced financial, infrastructural and institutional barriers in accessing adequate maternal healthcare in the state-owned hospitals.

“The attitude of the medical personnel and absence of the needed resources such as ambulance and bed spaces are factors that contributed to loss of life.

“The right to life puts an obligation on the state to take measures to safeguard individuals from arbitrary and preventable losses of life and this includes protecting women against the unnecessary loss of life related to pregnancy and childbirth.

“The acts and omission of the hospitals by their negligence violated the right to life,” the petitioners said, maintaining that it is the responsibility of the government to protect citizens against the loss of life especially for women during child birth.

Akiyode-Afolabi said there was a strong obligation to ensure that all the necessary facilities and adequate human and financial resources were available to prevent avoidable loss of lives.

“WARDC hereby proposes that Lagos State House of Assembly calls for a public hearing or independent investigations on the causes of maternal deaths and the contributory factors. W we believe that the public hearing will provide an opportunity to hear men and women, who have been affected by the issue in Lagos State,” they stated.

In response, Speaker Obasa, while sympathising with the families of the women who lost their lives during childbirth in the hospitals in the state, said the House would invite the accused hospital in Alimosho, as well as the Executive Secretary of the Mosan Okunola LCDA over the issue.

He commended the protesters for being peaceful despite their grievances and for taking the matter before the state Assembly.

“We will critically look at the one that happened at Rauf Aregbesola Health Care Centre, but LUTH is not under our jurisdiction.

“That does not mean that we do not have the right to protect the lives of the people of the state. We will write to the hospital and hear from them too,” the Speaker said.

The Speaker said the state has primary healthcare centres in all the local governments in the state that attend to children and women because the crowd at the general hospitals might make it difficult for many people to be attended to.

He also confirmed the presence of general hospitals in the local government areas in the state.

“We are not saying whether they are free of charge or not, but we have about 57 general hospitals in the state.

“We recently passed Health Insurance Law, where indigent people can easily access healthcare. All these we have been doing in the interest of our people,” he said while promising that the House would continue to care for the residents of the state and that the lawmakers were concerned about maternal mortality rate in the state.

“If any of our PHCs or general hospitals is not doing the right thing, get to us because we cannot work without information. It is only when we are well and adequately informed that we can act.

“Those who are there are being paid from tax payers’ money. So, we have to do something about it, which is why we are here. We are representing your interest and we will continue to do that.

“We will look at the petition and invite the necessary people from the concerned hospitals and your representatives so that we can get to the root of the matter and bring maternal mortality to an end,” he explained.