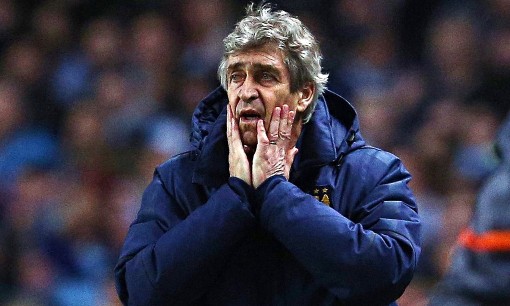 Beaten and bruised, Manchester City entertain a revitalised Borussia Moenchengladbach on Tuesday looking for a restorative victory that could yet yield a first-place finish in Champions League Group D.

City conceded top spot in the Premier League following a 2-0 defeat at Stoke City on Saturday and must now contend with a Gladbach team revelling in the feat of becoming the first team to defeat Bayern Munich in this season’s Bundesliga.

City must win and hope that group leaders Juventus lose away to Sevilla if they are to finish first in the group, but with a place in the last 16 already secure and a glut of injuries to occupy his thoughts, manager Manuel Pellegrini is not putting any pressure on his players.

“A lot of people were disappointed not to be top of the group, but it is not finished,” said Pellegrini, whose side lost 1-0 at Juventus in their previous group fixture.

“We have to play one game more and Juventus have to go to Sevilla. Sevilla are fighting for the Europa League and we play here against Borussia. If you ask me, I prefer to be qualified.

City were deservedly beaten at the Britannia Stadium, where a slick Stoke side prevailed courtesy of an early Marko Arnautovic brace and could conceivably have won more comfortably.

The visitors’ disappointment was compounded when Fernando limped off with a hamstring injury late on, exacerbating the injury glut that has ripped the core from Pellegrini’s team.

But Pellegrini can at least call upon playmaker David Silva, who made his first league start in nine weeks at Stoke following an ankle injury.

“I always say in this team we don’t depend on one or two players, but of course this team plays better, and in the style I like to play, with Silva in the starting line-up,” said Pellegrini.

“He can change the way we play because everyone tries to link with him and he makes the tempo of the game, and he has the most accurate passing in the last third for our team.”

Gladbach can no longer reach the knockout phase, but they will go into the Europa League if they match or better Sevilla’s result against Juventus.

Saturday’s 3-1 win at home to Pep Guardiola’s Bayern extended Gladbach’s unbeaten run under new coach Andre Schubert to 10 league games and having risen from bottom of the table to third, they travel to Manchester brimming with belief.

“We want to continue playing in Europe and this gave us a lot of confidence to keep working hard,” said Swedish left-back Oscar Wendt, who opened the scoring at Borussia Park.

Schubert changed tack by adopting a three-man defence for the visit of the champions-elect and winger Fabian Johnson said the outcome of the match proved that his side can beat any opponent.

“Even though we were up against possibly the best team in the world, we went out there determined to win,” said the United States international, who scored Gladbach’s third.

“The fact it went so well, perhaps we didn’t even expect that. That makes the win all the sweeter. We were brave and unlike a lot of other teams, we didn’t sit back. That paid off in the end.”