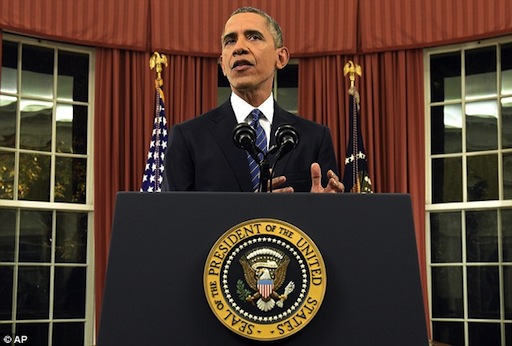 President Barack Obama used his Sunday night address on terrorism to reassure the American people that the San Bernardino shootings last week appear to be an isolated incident, despite one of the killers pledging allegiance to ISIS.

The president firmly dismissed a change in strategy in the war against the extremists that would require combat troops on the ground in Iraq and Syria.

And while the terrorist group is made up of ‘thugs and killers’ and is part of a ‘cult of death’, he again refused to call them ‘radical Islamic terrorists’.

“Americans must not take out their grievances with the fanatics on followers of Islam”, he said.

“Muslim Americans are our friends and our neighbors are coworkers, our sports heroes. And yes, they are our men and women in uniform who are willing to die in defense of our country,” the president said, speaking from the Oval Office. “We have to remember that,” he added.

He also called on Congress to pass legislation barring individuals on the no-fly list from purchasing guns.

The symbolic use of the Oval Office was an attempt by Obama to set a tone of political gravitas equal to the moment after repeated accusations that he underestimated the threat from ISIS and was too slow to identify the San Bernardino mass murder as domestic terrorism.

In only the third Oval address, Obama declared the killings an ‘act of terrorism’ and said the perpetrators went down the ‘dark path of radicalization’.

But there is ‘no evidence’ they were directed to commit the murders by a specific terrorist group nor is the United States under threat of an imminent attack, he said.

The FBI is still ‘gathering the facts’, Obama declared, but that much is known.

Syed Farook, a 28-year-old American, and Tashfeen Malik, his 29-year-old wife born in Pakistan – both Muslims – carried out the massacre which left 14 dead and 21 injured. The duo were killed in a police stand-off.

Malik is said to have pledged allegiance to ISIS on Facebook at the time of the rampage.

The FBI is investigating the shooting spree as a terrorist attack, it said Friday.

Addressing the United States’ campaign to debilitate ISIS this evening Obama said: “We cannot turn against one another by letting this fight be defined as a war between America and Islam. That too is what groups like ISIL want. ISIL does not speak for Islam.”

ISIS, he said, using an alternative reference to the group, ISIL, makes up a ‘tiny fraction’ of the billions of Muslims around the world – millions of whom ‘reject their hateful ideology’.

“That does not mean denying the fact that an extremist ideology has spread within some Muslim communities,” Obama said. “This is a real problem that Muslims must confront, without excuse.”

Leading Republican presidential candidate Donald Trump tore into Obama on Twitter during his remarks and said afterward, ‘Is that all there is? We need a new President – FAST!”

“Well, Obama refused to say (he just can’t say it), that we are at WAR with RADICAL ISLAMIC TERRORISTS.”