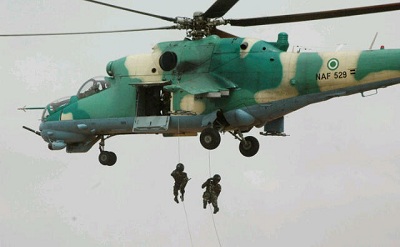 Nigeria’s military says it has carried out air strikes against militant Islamist group Boko Haram “deep inside” the Sambisa forest, destroying at least 11 of its bases.

Advancing ground troops killed several of the militants, and rescued civilians – including women and children – held captive, it added in a statement. Three soldiers were killed, and two others were wounded in the fighting, the statement said.

The Sambisa forest, along the border with Cameroon, is believed to be the last major stronghold of Boko Haram. Its fighters lost towns under its control in north-eastern Nigeria earlier this year, but the group continues to carry out bombings.