Nigerian couple jailed for keeping man as slave for 24 years 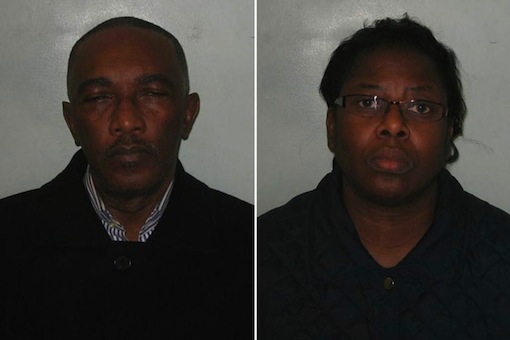 A doctor and his nurse wife who kept a man in forced servitude for almost a quarter of a century after illegally bringing him to Britain have both been jailed for six years.

Former NHS obstetrician Emmanuel Edet, 61, and midwife Antan Edet, 58, kept fellow Nigerian Ofonime Sunday Inuk as a “houseboy” after telling immigration officials he was their teenage son when they arrived here in 1989.

Over the next 24 years he worked unpaid up to 17 hours a day looking after the couple’s two sons, cooking, cleaning and gardening.

He was also forced to sleep on a hall floor for long periods of time. He eventually managed to alert a charity to his plight after the couple went to Nigeria for Christmas in 2013 and they were arrested the following March.

Sentencing the couple at Harrow Crown Court today Judge Graham said their treatment of Mr Inuk, now 40, left him “conditioned” to his plight.

Judge Arran said: “He was conditioned to the extent that that he did not ask for what he wanted because he expected his request to be refused. He was paid the occasional pocket money of perhaps £10. He claims that that was only at Easter and Christmas and occasionally visitors would give him larger sums.

“He most certainly was not paid for the work that he was performing for you.

“The most serious aspect of your behaviour towards him was that it went on for an exceptionally long period of time, robbing him of the opportunity of leading a normal life. He suffered as a result of that treatment and has found it difficult to adjust (to) a normal life.”

The court heard that the sum he was in theory owed for his years of work ran into hundreds of thousands of pounds.

Dr and Mrs Edet, from Perivale, north west London, were found guilty by a jury last month of cruelty to a child under 16, servitude and assisting unlawful immigration.

They remained impassive as the sentences were handed down today.

Caroline Carberry, prosecuting, said Mr Inuk felt like his life had been ruined by his years in the family home.

Analysing his victim impact statement she said: “He has suffered very low self esteem in regards to interaction with others. He spoke of feeling sad, alone and depressed. He can see no future and thought his life had been wasted and, as such, considered suicide.”
The couple were jailed for three years for child cruelty, six for servitude and one for the immigration offence, all to run concurrently.

Although their mistreatment of Mr Inuk spanned 24 years, illegal servitude only became an offence under the Coroners and Justice Act 2009 so they were convicted and sentenced for their actions only between 2010 and 2013. However, Judge Arran said he considered the total length of time Mr Inuk suffered as an aggravating feature.

Mr Inuk told the trial his passport was confiscated and he was told that if he left the house he would be deported as an illegal immigrant.

The gently spoken Mr Inuk, who gave his evidence from behind a screen so he could not see his tormentors, said the Edets changed his name and added him to their family passport as their son when they first brought him to the UK in 1989 via Israel, aged around 13 or 14.

He had agreed to go with them because he believed he would be paid and educated.

He lived with them at several locations including in London and Walsall, West Midlands, and kept a diary in which he catalogued his treatment at the hands of people he called “sir” and “ma”.

Mr Inuk’s family contacted the Edets in 2004 after they received a letter in which he described how he was being treated.

A row later broke out between the Edets and Mr Inuk’s cousin but the Edets claimed they had sent money and passports to Nigeria. They also claimed they had transferred money into a bank account but Mr Inuk had no knowledge of this account, the court was told.

The prosecution said Mr Inuk became so dependent on the Edets he felt he had no choice but to stay with them.

But he made several attempts to try to break away, telling the jury he spoke to a family friend, an MP, and was left feeling “a bit dejected ” when he tried to report the Edets to the police in around 2005 only to be told they could not help as it was a “family matter”.

The sentencing heard that Dr Edet also worked as a teenage pregnancy advisor for Surrey Council and for a drug safety research unit in Southampton.

Barristers for both the Edets argued that they suffered ill health.

Dr Edet’s assets totalled around £30,000 including a house in Nigeria, while Mrs Edet, who worked as a £27,000-a-year NHS ward sister until she was arrested, had no assets.