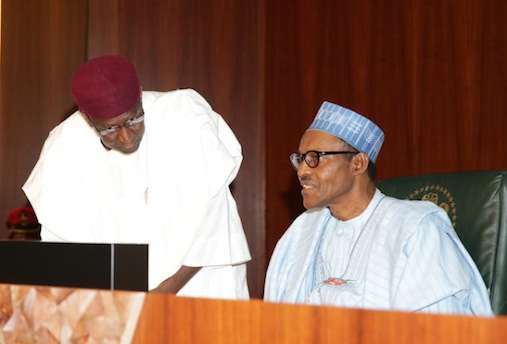 President Buhari and Abba Kyari at a FEC meeting

Nigeria’s Federal executive council has decided on a N6 trillion ($30.3 billion) budget for 2016, the planning minister said on Monday, marking a 1.5 trillion naira rise on last year despite low oil prices that have hammered the country’s economy.

Budget and Planning Minister, Udoma Udo Udoma said 30 per cent of next year’s budget would be allocated for capital expenditure, adding that ministers aimed to fund this through a rise in non-oil revenues.

Nigeria, which relies on oil exports for 70 per cent of government revenue, faces its worst economic crisis in years brought on by the sharp fall in crude prices.

Udoma said the cabinet was assuming a conservative oil price of $38 a barrel and oil production at 2.2 million barrels per day. Lawmakers passed the 2015 budget at $53 a barrel in April.

“The highlights are as follows. We project and we are working with 38 dollars crude oil price.

“We consider that to be very conservative but because of the uncertainties we feel that we should start with a conservative crude oil price.

“We also are working with 2.2 million barrels per day production.

“We believe it is achievable, particularly because with the passage of the Petroleum Industry Bill which we are working to achieve, we believe that that is actually a modest figure; that we should be able to produce something higher than that.

“Most of the increases, all the increases actually will be spent on capital because there is the need to increase the capital spend because of our infrastructure issues we have to address.”

According to him, the plan will be submitted to the National Assembly and a feedback expected after which the budget will be finalised with all the details embedded.

The minister said that the funding for the budget would come from earnings from the non-oil sector.

“We will also look at keeping down our recurrent budget, that means we are looking at savings that we can make from overheads.

“We will also look at the defficiency from our revenue collecting agencies like the FIRS, in terms of companies income tax; in terms of VAT, and then the difference we will have to borrow.

“But the level of borrowing that we anticipate and we are projecting will be well within the maximum that we allow, which is three per cent of the GDP, because we want a prudent budget; we want a credible budget.’’

Udoma futher said that the council was working on the exchange rate that the Central Bank of Nigeria had given for the budget, adding that it was also looking into whether fuel subsidy would be retained in 2016.

According to him, government is projecting almost 30 per cent of the budget on capital projects, up from the 15 per cent or so that it is currently.

“We will try and reduce overheads, but keep personnel cost; we are not going to adjust it by much.

“But we at expecting some savings from the Integrated Payroll and Personnel Information System (IPPIS) which we are using; so we are not cutting anybody’s salary; everybody will get their salaries.’’

The minister, however, declined to mention how much of the looted funds had been recovered by the government so far.

“The level of borrowing that we anticipate and we are projecting will be well within the maximum that we allow, which is 3 percent of the GDP, because we want a prudent budget,” he said.

Many analysts have said the current low oil price would be an ideal time to cut it without hitting the population too hard.