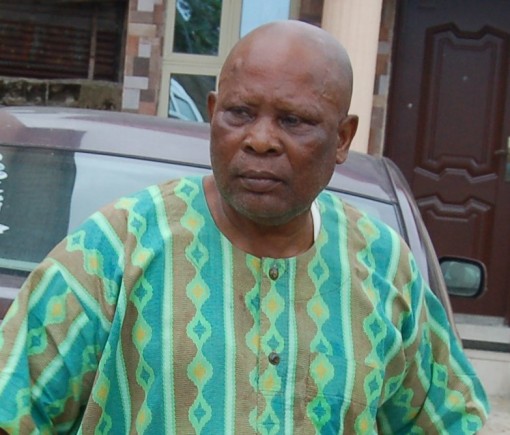 Joe Onwudimowei, one of the suspects arrested by EFCC over $4m fraud

They are being prosecuted on a 22-count charge bordering on forgery, conspiracy and obtaining by false pretence to the tune of four million dollars ($4,000,000) by the Economic and Financial Crimes Commission, EFCC.

One of the counts reads: “That you, Emmanuel Idowu Olanrewaju (a.k.a Henry Idobari, Eng. Henry, also trading under the name and style of Hillmat Farms), Joe Onwudimowei, Prince Moses Ijieh (at large), Ogbonyomi Taiye B. (at large), Aliyu Haladu Madaki (at large), Total Intership Services Limited., Hillmat Hotel Limited., Hillmat Integrated Services Limited, Hillmat Motors Limited., and Idobari Limited on or about the 12th day of June, 2009, at Port Harcourt within the jurisdiction of this Honorable court with intent to defraud obtained a sum of $250,000, from Allen Bird, an American citizen, as part payment for the sale of 2.9 million Barrel of Bonny Light crude oil, which you all claimed to have the capability to deliver to him, which pretext you knew to be false and thereby committed an offence contrary to Section 1 (1) (b) of the Advance Fee Fraud and other Fraud Related Offences Act 2006 and punishable under section 1 (3) of the same Act”.

The accused persons had during their arraignment on November 30, 2015 pleaded not guilty to the charge preferred against them.

Following their “not guilty plea”, A. Adedipe representing the 1st, 3rd, 4th, 5th, 6th and 7th accused persons and D.C. Oyiboka standing for the 2nd accused person, in separate applications prayed the court to admit the accused persons to bail.

However, counsel to EFCC, F.O. Dibang countered with a 17-paragraph affidavit wherein he urged the court to grant the accused persons bail on strict terms considering the seriousness of the offence committed.

Justice Agomoh admitted the first accused and his companies to bail in the sum of N5 million and two sureties in like sum.

The sureties must be civil servants not below salary grade level 14, and are to deposit two passport photographs each with the court.

Also, the first accused must deposit two passport photographs, his international passport and undertake in writing to be present always during his trial.

In the same vein, Joe Onwudimowei, the second accused secured bail with a surety who must be a blood relation resident within the jurisdiction of the court.

The accused and his surety must deposit two passport photographs each.

Also, the accused must undertake in writing to be present always during trial.

The judge ordered the accused persons to be remanded in prison custody pending the perfection of their bail terms.