Chibok girls not among 900 rescued from Boko Haram - Cameroon 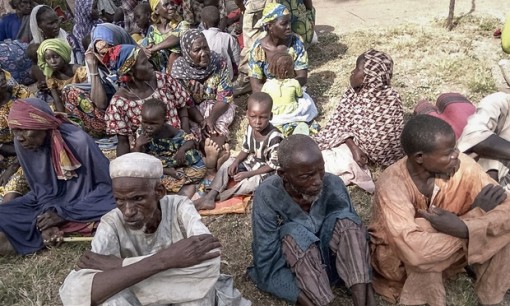 FILE PHOTO: A Nigerian army photograph supplied this week of some of the 338 people rescued after being held by Boko Haram. Photograph: AFP/Getty Images

Cameroon said on Monday that schoolgirls Nigerian town of Chibok, kidnapped by Boko Haram last year were not among a group of 900 hostages liberated by the country’s army.

Last week’s hostage release raised hopes that some of the girls might be among the group. The army also said it killed at least 100 Boko Haram fighters in the operation as it seeks to strike back after a series of attacks, not least in its Far North region.

“The people that were freed are just villagers. The schoolgirls who are missing are not amongst the group,” Information Minister Issa Tchiroma Bakari told Reuters by telephone.

The freed hostages were driven in crowded open-topped trucks to the town of Maroua in the Far North at the weekend and given food aid and water by regional officials, Reuters television pictures showed.

Boko Haram seized around 219 schoolgirls in April 2014 from their dormitories in the town of Chibok, northeastern Nigeria, about 50 km (30 miles) west of the border with Cameroon. The kidnapping stirred international outrage.

Efforts to track them down have proved fruitless, in part because they have probably been split up into small groups and settled with families in villages across a wider area of terrain, according to analysts.

Cameroon is part of an 8,700-strong task force including troops from Chad, Niger, Nigeria and Benin that has pledged to destroy Boko Haram, which though based mainly in Nigeria has become a major threat to wider regional security.

Suicide bombings, often carried out by young women recruited by the militant group, are becoming almost daily occurrences in the Far North. The government denies that Boko Haram holds any territory in Cameroon.