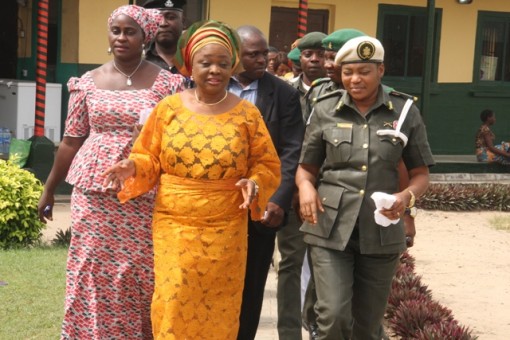 Hon Commisioner Mrs Lola Akande and other Officials of the Ministry being escorted to their cars by Officer in Charge of Female Prisons Kirikiri Lagos Mrs Ekpendu Lizzy.

The Lagos State Government has charged female prisoners at the Kirikiri Prison to endeavour to acquire vocational skills that could be very useful when they leave the prison environment.

Commissioner for Women Affairs and Poverty Alleviation, Lola Akande, who gave the charge while addressing inmates of Female Section of the prison during an assessment tour of the prison, urged the inmates to make judicious use of their time in prison by learning skills or vocations that would be useful in earning a living and be self-employed instead of depending on others after their prison terms.

She also advised women to control their temper and guide their utterances in the face of any provocation in order not to be found on the wrong side of the law.

According to her, unguarded action taken on the spur of the moment in anger usually ends in regrets, adding that it is ideal for all to learn to restrain oneself from indulging in any act of violence whenever there is a disagreement.

While reacting to their plea for a state pardon, Akande promised to look into their request and discuss with appropriate authorities for assistance.

The Commissioner commended the Deputy Controller of Prisons in charge of the female prison, Mrs. Lizzie Ekpendu, whom she described as a mother, for bringing so much transformation to the prison and the lives of the inmates.

Earlier, Ekpendu thanked the Ministry of Women Affairs and Poverty Alleviation for its support for the needs of the prisons service in general and particularly in the area of providing teaching materials for Skill Acquisition Programmes for the inmates.

She appealed to the commissioner to assist them with the provision of transportation for the movement of inmates to and from courts as well as for other logistics.