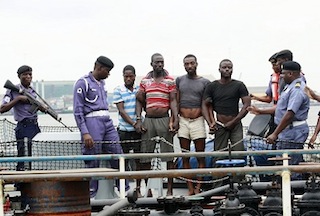 The Nigerian navy has nabbed seven crew members on a ship and two barges near Onne Port suspected to be oil thieves.

The Flag Officer Commanding Eastern Naval Command, Rear Admiral Atiku Abdukadiri confirmed to journalists that one of the ships was carrying more than 300,000 litres of product suspected to be illegal refined crude oil.

He said while the Nigerian Navy has increased its surveillance of the waterways in Rivers State to enable water travellers have a hitch free Christmas celebration, it will need information from travellers on criminal activities on the waterways.

The forward operating base FOB in Bonny had also arrested two ships along the Bonny waterways last week with content suspected to be illegal crude oil.

Security observers believe that with the yuletide season fast approaching, oil thieves are likely to increase in order to make quick cash.