Re: Aso Rock Lens: Lest the Vice President breaks down 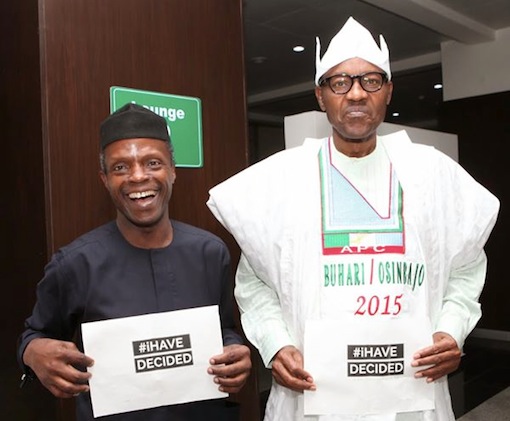 “I have never regarded myself as having a monopoly of wisdom. The trouble is that when most people in public life and in the position of leadership and rulership are spending whole days and nights carousing in clubs or in the company of men of shady character and women of easy virtue, I, like a few others, am always busy at my post working hard at the country’s problems and trying to find solutions to them, Only the deep can call to the deep.” – Chief Obafemi Awolowo

As I read through the piece of Olalekan Adetayo, titled ‘Aso Rock Lens: Lest the Vice President breaks down’ published in the Punch Newspaper on 5 December, I could feel chills running down my spine because of the sincerity of purpose and the genuineness of heart with which it was written.

But then I could also not help but remember the popular saying, “The reward for hard work, is more work” and Nigeria’s President, Muhammadu Buhari and Vice President, Prof Yemi Osinbajo have proved that saying right.

I remember when Buhari and Osinbajo were campaigning for office, both of them repeatedly stated across many states that they were running for office to serve the people and country.

They said they believed in the Nigerian project, they said they strongly believed that millions of Nigerians can live above the poverty level and go to school, find good employment and now that it is time to deliver, they wouldn’t back out or shy away from this duty unless they have a genuine reasons to do so.

Only last month, Osinbajo reiterated that Muhammadu Buhari’s administration will strive to deliver on its campaign promises which include free meals for primary and secondary students as well as employment for the youths.

As a Christian and a man of God, Osinbajo will not make vain promises because the God he serves is ‘One’ that will not let his words return to Him void.

Since assuming office, Osinbajo along side his boss, have embarked on foreign trips to improve both the foreign and trade relations of Nigeria as well as lure investors to come to the country.

Given the state of the economy, dwindling oil prices, near-comatose manufacturing sector and huge corruption in the system, Osinbajo knows that for this administration to achieve its goals things must be done very differently.

This includes sacrificing his time and body to put the country back but not at the detriment of his health. I’m sure he has regular medical checkups but just because he is modest person and does not throw it in the faces of Nigerians like most politicians do with their so-called “foreign medical check-ups” in the process spending tax payers money that could otherwise have been used here judiciously.

If one takes a deep rooted look into the working past of the Vice-President it would be discovered that the life of our VP is characteristic of giving his best to achieve results which are in the best interests of all concerned.

The adage by Philip Stanhope that says “whatever is worth doing at all is worth doing well” directly drives the VP. He is one who never commits to a job or cause without throwing in a 110% of his time, effort and energy. A quick look at the work history shows that the VP after his mandatory NYSC in 1980 was employed as a law lecturer at the University of Lagos rising to Senior Lecturer and between 1988-1992 became an Adviser to the then Attorney-General and Minister of Justice, Prince Bola Ajibola.

In 1997, he returned to UNILAG as Professor of Law and Head of Department of Public Law but in the public eye though nothing defined or endeared the VP to Nigerians like his time as Attorney-General and Commissioner of Justice in Lagos state, simply put it was a time of work, work, and more work. Prof Osinbajo redefined and indeed revolutionized what the Lagos state justice system was; creating a harmony and synergy between the state government and the public.

With same work ethic, he has served God, rising from being an usher to become the Pastor in charge of Lagos Province 48, Olive Tree provincial headquarter parish, Ikoyi before his inauguration into office as the Vice President of Nigeria.

The VP is a man who hard work is a norm for it is not a style he suddenly just picked up, it is a value that has lived with him from many years back. He is a man who pushes himself to the limit, he sets very high expectations of himself and his staff, he never looks to keep things lying low rather he looks to breaking new frontiers and barriers and from what I have come to understand he doesn’t mind to lose sleep to achieve those results, a quality I believe other politicians may borrow a leaf from.