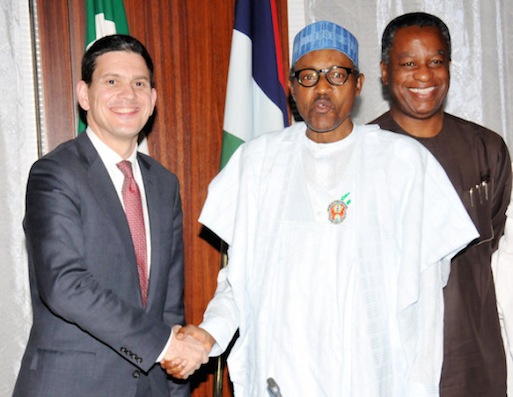 President Muhammadu Buhari said on Wednesday in Abuja that the return of persons displaced by the Boko Haram insurgency to their home communities will begin in earnest next year.

Speaking at a meeting with a delegation from the International Rescue Committee (IRC) led by former British Foreign Minister, Mr. David Miliband, President Buhari said that his administration will do all within its powers to facilitate the quick return and resettlement of over two million internally displaced persons in their towns and villages.

The President told Miliband and his delegation that the Federal Government will welcome the support of the IRC and other local and international non-governmental organizations for the rehabilitation of internally displaced persons.

“In 2016, the return of the IDPs will start in earnest. They will return to their communities to meet destroyed schools and other infrastructure which have to be rebuilt.

“With agriculture being moribund in the region in the last two years without cropping, hunger is already manifest. We will welcome all the help we can get to assist the returnees, ” President Buhari said.

Responding to a request by Mr. Miliband for the Federal Government’s priorities as to the nature of assistance required for the IDPs, the President said that there was an urgent need for support in the areas of agricultural inputs, health, nutrition, water and sanitation.

President Buhari urged the IRC and other international agencies to work with the Presidential Committee on the North-East and the National Emergency Management Agency (NEMA) which, he said, were already doing a lot to cater for the IDPs and restore some basic infrastructure in communities affected by terrorism and insurgency.

Mr. Miliband assured President Buhari that the IRC will intensify its ongoing work in Nigeria which has assisted over 350,000 displaced persons, mainly in Adamawa and Borno states.

He called for an increased security presence in recovered towns and territories, saying that most prospective returnees still feared for their safety on their return home.