Man jailed for life for selling marijuana, another bags 25 years for cocaine 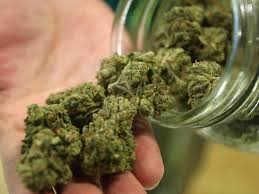 Another convict Amaechi Igwe, 37, was sentenced to 25 years imprisonment by the same court for dealing in 2.7 grammes of cocaine.

In a one count criminal charge number FHC/L/108/15 filed before the court by the NDLEA prosecutor, Jeremiah Aernan, it was alleged that Aluagwu Lawrence, on 12 February ,2015 under the bridge at Ojota, Lagos without lawful authority dealt in 220 grammes of Cannabis Sativa, a narcotic similar to cocaine, heroin, LSD, etc, and thereby committed an offence contrary to and punishable under sections 11(c) of the National Drug Law Enforcement Agency Act, Cap N30 laws of the Federation of Nigeria 2004.

He was arraigned before the court on 16 June, 2015. He pleaded guilty. Consequently, Mr Aernan reviewed the facts of the case as stated in the charge. The convict was not represented by any lawyer.
When the presiding judge asked him if he has anything to say, he told the court that his father was a marijuana smoker who persistently beat his mother before they were sent away from home.

He also told the court that he did not go to school, and that he was initially training as an athlete at the National Stadium when a soldier promised to help him travel abroad but the soldier deceived him and duped him of his money. Thereafter, he said had nothing to do and decided to start selling marijuana.

In her judgement, Justice Ofili Ajumogobia sentenced him to life imprisonment.

In a criminal charge number FHC/L/202C/15 filed against the second convict, Amaechi Igwe, on 8 May, 2015 at Mile 12 Market in Lagos, without lawful authority dealt in 2.7grammes of Cocaine thereby committed an offence contrary to section 11(c) of the NDLEA Act.

He pleaded guilty and was was not also represented by any counsel while the fact of the case was also reviewed.

When Justice Ajumogobia asked him what he wanted to say before the court, he urged the judge to temper justice with mercy.

Thereafter the convict was sentenced to 25 years imprisonment with hard labour.