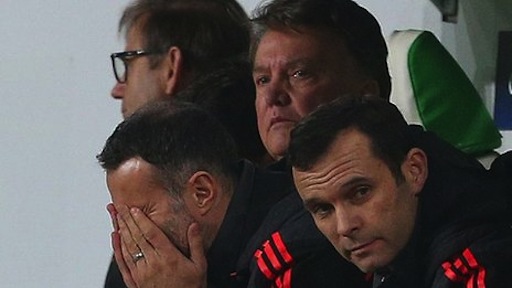 Louis van Gaal insists his Manchester United side are showing signs of improvement this season, despite being knocked out of the Champions League.

United failed to qualify for the last 16 after a dramatic 3-2 defeat at German side Wolfsburg on Tuesday.

“At the moment I cannot defend myself because we are out of the Champions League,” said the Dutchman, whose team drop into the Europa League.

“But the facts say we are better than last year.”

United are fourth in the Premier League, having finished in the same position in Van Gaal’s debut campaign.

The former Netherlands coach, who replaced David Moyes in May 2014, led the Red Devils back into the Champions League after they failed to qualify for Europe under the Scot.

United were eliminated by Championship side Middlesbrough in the League Cup fourth round this season, following an embarrassing 4-0 second-round defeat by MK Dons in the same competition last season.

“When you see the facts we went further in the Capital One Cup this season, qualified for the Champions League group,” said 64-year-old Van Gaal.

“We have played all these matches and are still in a very good position in the league.

“I’m also disappointed that we are out of the Champions League.”

‘We didn’t have an easy group’

But Van Gaal rejected suggestions that his side should have qualified comfortably.

“This was a tight group so I am not agreeing with any opinion that this was an easy group,” he said.

United had only conceded two goals in the previous nine matches before their trip to Wolfsburg, but were defensively uncertain throughout the Group B tie.

They conceded just three minutes after Anthony Martial’s opener, then allowed Wolfsburg to score the winner within seconds of equalising for 2-2.

But Van Gaal’s side did offer more attacking threat in Germany than they had in previous weeks.

United were booed off after Saturday’s 0-0 draw with West Ham at Old Trafford, the fifth time in nine matches they had failed to score.

“It was a crazy match,” said Van Gaal, who also saw Jesse Lingard have a goal disallowed before half-time on Tuesday.

“We didn’t score many goals before and in an away match you score two goals – maybe three but one was cancelled out.

“But twice you give away a goal within two minutes of scoring, that’s difficult to understand when you defend so well normally.”