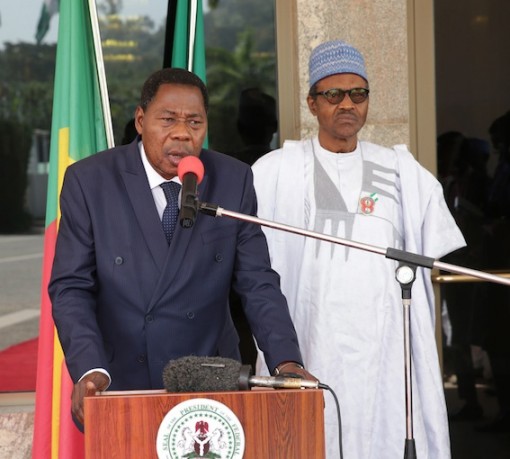 President Muhammadu Buhari has pledged that Nigeria will assist the Republic of Benin in conducting free and fair general elections in 2016.

The President made the pledge in Abuja on Tuesday at a joint news conference with his Beninoise counterpart, Boni Yayi, after a closed door meeting at the Presidential Villa.

He congratulated Yayi, who will be completing his second five-year tenure as President of Benin Republic in February 2016.

“He (President Boni Yayi) is going to round up his two terms of five years.

“He will be 10-year old in February as a President. I congratulate him

“Certainly, Nigeria, using its experience of holding elections, will make sure that the election in our neigbouring country has gone on smoothly and as humanly possible.”

President Buhari stated that Nigeria and Benin Republic have agreed to put in place fresh strategies to check oil theft in the Gulf of Guinea.

The President also promised to expedite action on the request by Benin Republic to link its power turbine with the West Africa Gas Pipeline.

On the forthcoming 40th anniversary of ECOWAS, Buhari assured that Nigeria will host the event in the next nine days.

NAN reports that the closed door meeting between the two leaders dwelt on economic integration, regional cooperation, and security within the West African sub-region.

The two presidents agreed to intensify the on-going efforts to tackle the menace of Boko Haram insurgency under the auspices of the Multi-National Joint Task Force.

In his remarks, President Yayi said that his country was ready to contribute 800 men to the multi-national force.

He said the men were ready and were only awaiting deployment.

Yayi, who spoke through an interpreter, said his country would always support Nigeria in the fight against terrorism and corruption.

While applauding the leadership style of Buhari, Yayi pledged to always cooperate with Nigeria.

“President Buhari took over the mantle of government at a time terrorism, occasioned by the activities of Boko Haram, is high.

“The will-power is there and Benin is committed to deploying the men. Benin will always remain on the side of Nigeria in its trying times.

“The sub-region is also going through serious problems of development. Fighting Boko Haram is becoming difficult because OPEC countries are going through oil crisis.

“We will always stand beside Buhari in his fight against corruption.”

The council, led by its Chairman, Malam Bashir Ibrahim, made this position known to State House correspondents after visiting President Muhammadu Buhari at the Presidential Villa, Abuja.

Ibrahim stated that the council has launched a campaign against undue influence of “big money in Nigerian politics”.

“To deal decisively with economic and financial corruption, we must simultaneously deal with political corruption as well,” he said.

He pledged the council’s commitment to the unity and indivisibility of the country.