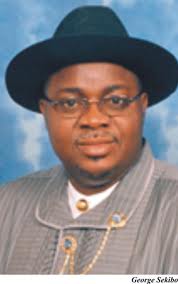 Peoples Democratic Party, PDP, in Rivers State has been gripped by fear as the Court of Appeal sitting in Abuja on Thursday sacked Senator George Thompson Sekibo and others with APC candidates having all its appeals upheld.

The sacked senator had been representing Rivers West Senatorial District in the National Assembly since 1999.

At the 7th National Assembly, Sekibo was Chairman, Committee on Defence. He was considered very close to former President Goodluck Jonathan and his wife, Patience, and so, wielded much influence.

Sekibo was not the only casualty of the appeals filed by candidates of All Progressives Congress, APC. Also thrown out of the National Assembly by the Court of Appeal Thursday was Hon. Blessing Nsiegbe.

Nsiegbe, until her removal, had represented Port Harcourt Constituency 2 in the Federal House of Representatives under PDP ticket.

A top PDP source has described Sekibo’s sack as “shocking”.

The source said that Sekibo’s loss was unexpected.

“We are in shock over Senator George Sekibo’s loss at the Court of Appeal. We had considered his matter as one of those already in our kitty. Now that he has been sacked, it means we are not sure of anything.”

The court ordered that fresh elections be conducted within 90 days by the Independent National Electoral Commission, INEC, in the affected senatorial district and Federal Constituencies in Rivers State as all the cases were in favour of APC.

The case between Senator Magnus Abe of APC and Senator Olaka Wogu for Rivers East would be decided on Friday, 11 December by the Court of Appeal.