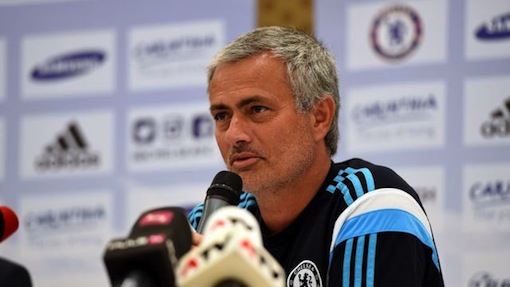 Former Liverpool boss Brendan Rodgers, 42, does not want to return to Swansea following Garry Monk’s sacking because he hopes to succeed Roy Hodgson as England manager next summer.(Times – subscription required)

Ex-Swansea defender Sam Ricketts believes Rodgers would be taking a “backward step” if he returned to Swansea. (Talksport)

Manchester United boss Louis van Gaal, 64, could be sacked if his side do not finish in the top three of the Premier League this season.(Daily Express)

West Brom striker Saido Berahino, 22, is again set to miss out on a move to Tottenham – because the Baggies are refusing to deal with the Londoners. (Daily Mirror)

Manchester City winger Raheem Sterling, 21, says he studies Barcelona’s Lionel Messi and Real Madrid’s Cristiano Ronaldo closely to “learn as much as I can” from them. (Guardian)

Chelsea boss Jose Mourinho “has been a great coach in the past but, as a person, he is fake”, says former Blues striker Adrian Mutu who briefly played under the Portuguese at Stamford Bridge in 2004.(Daily Mirror)

Striker Daniel Sturridge is “a luxury Liverpool cannot afford”, according to former Reds midfielder Dietmar Hamann who played with the 26-year-old at Manchester City. (Talksport)

There are no Manchester United, Liverpool or Chelsea players in the Premier League team of the season so far.(Daily Mail)

Following Arsenal’s 3-0 win over Olympiakos to reach the Champions League last 16, Gunners forward Alexis Sanchez said: “So happy for the victory of the team, we are in the next stage.”

After former Liverpool captain Steven Gerrard described Arsenal’s Aaron Ramsey “as the best attacking midfielder in the Premier League”, the Welshman responded:“Honoured to hear that from a legend like Gerrard.”

Manchester United defender Marcos Rojo posted a ‘thumbs-up’ picture from his hospital bed after a shoulder operation he called a “success”.

Former Cardiff and Wales defender Danny Gabbidon saidSwansea chairman Huw Jenkins made the right decision to sack Garry Monk because “he had lost the dressing room”.

Southampton defender Florin Gardos tweeted: “I am on the search for a nickname. Can anyone help? Much appreciated.”

Manchester City players including captain Vincent Kompany and midfielders Yaya Toure and Fabian Delph have read out a series of ‘mean tweets’ from fans in which they have been severely criticised.(Manchester City YouTube channel)

A 90-year-old Everton fan, who has been supporting the club since the mid-1930s, was invited to sit next to Toffees boss Roberto Martinez in the dugout during Monday’s 1-1 draw with Crystal Palace at Goodison Park. (Liverpool Echo)