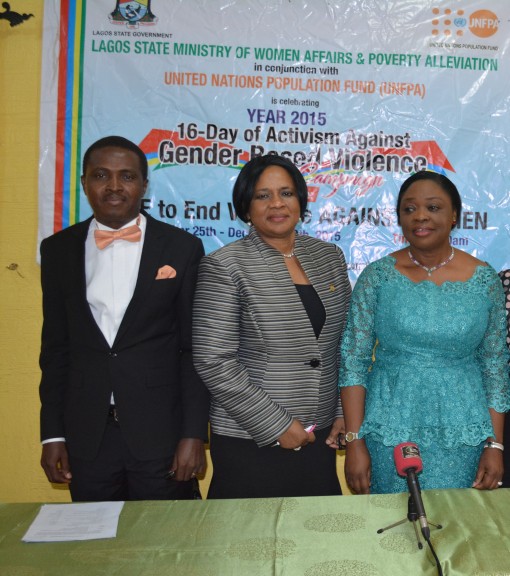 The Lagos State Government has decried rising cases of violence against women in the state, warning husbands to desist from beating their wives.

Commissioner for Women Affairs and Poverty Alleviation, WAPA, Lola Akande spoke on Thursday at the event marking the International Day for the Elimination of Violence Against Women, held at the Ostral Hall, Ikeja, Lagos, southwest Nigeria.

The theme of this year’s celebration is ‘From Peace in the Home to Peace in the World: Make Education Safe for All’.

Akande disclosed that in the last one year, over 2,000 cases of gender-based violence against women and the girl child had been reported in the state, saying that government was determined to halt this ugly trend.

She said government had been very responsive whenever it received calls concerning violence against women, saying that once “such case is reported, what we do is to rescue the victim from their environment and take them to the transit home where we take care of them.

“It is not proper for husbands to beat their wives or for a man to beat a woman for whatever reason. Men need to restrain themselves from beating their wives as she is not a punching bag.”

The commissioner said that government had also passed the Child Rights Law to ensure that violators of the provisions of the law were prosecuted in the family court where offenders were fined, jailed or sentenced to both depending on the gravity of the offence.

She added that the law also empowered WAPA to remove the abused child and place him in custody where the government is responsible for his education and general wellbeing.

Akande stated that with the rising cases of domestic violence and rape in recent times, government had established the Domestic and Sexual Violence Response Team (DSVRT), saying that the team had responded to cases of domestic violence and provided all necessary support, such as access to justice, free medical assistance and counseling to the victims.

The commissioner appealed to residents of Lagos to report all forms of sexual abuse, domestic violence or child abuse in their different communities, as the identities of the whistle blowers would always be protected.

Permanent Secretary, WAPA, Dr. Elizabeth Oduwole called on all stakeholders to team up with the state government in order to nip the scourge of all forms of domestic violence in the bud in Lagos State.

“In the last 15 days, our motorized campaign vehicles have gone round tertiary institutions, motor parks and some of our skills acquisition centres to sensitise the people on the dangers of domestic violence and government’s efforts to curb it,” she said.

She said government’s focus in this year’s symposium was the protection of young persons because gender-based violence was predominant among the youths in school campuses which was happening at an alarming rate.

“It is significant not because they have become most vulnerable, but also for our belief that no amount of developmental efforts by the government and the civil society can yield positive and lasting result without active involvement of the younger generation. Their future can only be guaranteed when they are safe and protected from violence that they are now daily confronted with in the society,” she stated.