Soyinka decries arbitrary use of terror by security forces 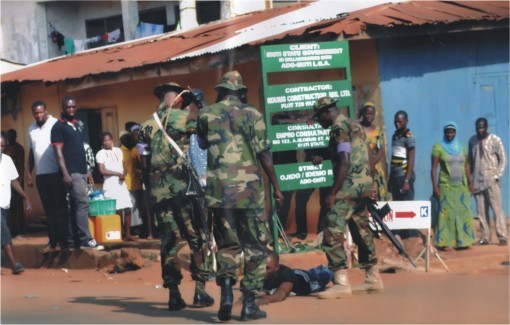 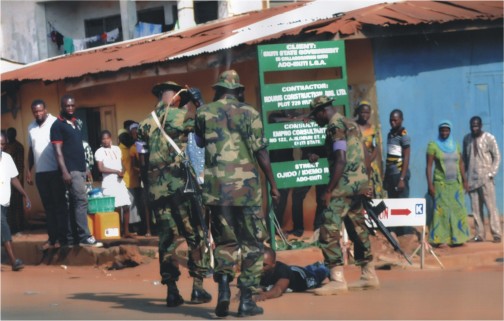 Wole Soyinka, Nobel Laureate and human rights activist, has called on the Muhammadu Buhari-led government to move swiftly to end the recurrence of arbitrary use of force on civilians by security forces, especially representatives of the Nigerian Army.

Soyinka’s lament came on the heels of recurring reported cases and picture evidences of the regular unleash of terror on mostly unarmed and helpless Nigerians by the men in uniform whose constitutional role is to protect the people.

The Nobel Laureate emphasised that having come out of a difficult twenty-nine year military rule, Nigerians must be allowed to enjoy the freedom that democracy promises.

He also raised other concerns including issues of contempt of court and unauthorised detention.

At the award presentation event, two honorary prizes, the lifetime award for journalistic excellence and the anti-corruption defender award were presented respectively to veteran broadcaster, Bimbo Oloyede and immediate past Chairman of the Independent National Electoral Commission (INEC), Professor Attahiru Jega, who was represented by his former personal assistant, Abdullahi Usman.

Also, twelve journalists were celebrated for their outstanding work. Five of these became Soyinka Laureates, four made the runners-up list and four were commended for a job well done, one of the finalists having made both the commended work and laureate list.

Adekunle Yusuf of The Nation was commended for his story, ‘How Corruption, Leadership Hamper NDLEA’s Drug War’ which details challenges of compromise ravaging Nigeria’s drug law enforcement agency. Yusuf also doubled as the winner of the print category with his piece ‘Inside the Oil Deals That Cost Nigeria Billions’, yet another account of the corruption plaguing Nigeria’s oil and gas sector.

In her work, ‘Ovum Trading: Inside Nigeria’s Multi-Million Naira Human Egg Business’ which was selected as the runner-up in the print category, Motunrayo Joel of The Punch Newspaper called the public’s attention to a dangerous and quietly growing issue of sales of human egg by young girls.

The photo story, ‘Soldiers punish a civilian at Mararaba, Nasarawa State’ by Ikechukwu Ibe of The Daily Trust which was the winning work and the commended piece, ‘Mercy please, mercy’ by Ayodele Ojo of The Sun, both vivid images of the high handedness of soldiers, served as reference points on the need to curb the excesses of security forces in the country.

Adedayo Odusanya of The Punch was runner up in the category with his photo titled, ‘Double Jeopardy’, a picture of students whose classroom was in an open space sandwiched between stench from a refuse dump and an abandoned cemetery.

In the editorial cartoon category, Chukwuemeka Emenike of The New Telegraph was declared runner up for his piece, ‘No Retreat, No Surrender’, which commented on the challenges with mutinying soldiers in the fight against Boko Haram, while ‘Chasing shadows’, Asukwo Bassey’s cartoon, published in the Business Day Newspaper, highlighting the challenge of motion without movement by Nigeria’s anti-corruption agencies in the fight against the corruption menace, was selected winner of the category.

True to the observation of the judges’ board on the poor performance of the broadcast media over the years, one person each made the shortlist in the television and radio categories. Sumner Sambo of Television Continental won the television category with his story on ‘Cattle Rustling in Northern Nigeria’, a narrative on the ordeal cattle rearers in Northern Nigeria face in the hands of an armed notorious group.

Kikelomo Ifekoya of the Federal Radio Corporation of Nigeria (FRCN) on her part was commended for again bringing to the fore the now increasing case of domestic violence with her piece, ‘Domestic violence against women’.

In the online category, Bassey Udo of Premium Times was commended for his story, ‘Inside the Huge Scam Leading to Sale of Nigeria’s Aluminium Plant, ALSCON, to Russia’s RUSAL’ a narration of how the Nigerian government used the Russian Aluminium, RUSAL as front to perpetrate corrupt practices. Fisayo Soyombo of The Cable was selected as the runner-up for the category with his series, ‘Ebola in Liberia, an account of the corruption that attended the Ebola Fund while also reminding many of the high costs of the spread of the epidemic from Liberia to Nigeria.

The opening formalities of the milestone award celebration of the centre for investigative journalism commenced at 5:05pm with speeches on the importance of the media to shaping and ensuring social justice in Nigeria by the Centre’s board chair, Ropo Sekoni, the Deputy Ambassador to the Netherlands Embassy, Michel Deelen and the General Manager Policy, Government and Public Affairs, Chevron, Deji Haastrup while Abigail Ogwezzy-Ndisika, an Associate Professor of Mass Communication with the University of Lagos presented the 2015 judges’ report.

The event, which was made lively by folklore songs by Kininso Koncepts, a theatre art group from the University of Lagos as well as the great moderating flair of the duo of Deji Bademosi, Executive Director of TV360 and Funke Treasure-Durodola, Managing Director of Radio One, had about two hundred guests, including students of journalism, leaders of the media industry, journalists, private sector experts and members of the diplomatic corps, in attendance.

The ceremony was closed with an award for ten years’ meritorious service to one of the Centre’s member of Staff, Yakubu Afuye and an appreciation remark by Mr Jiti Ogunye, the Board Secretary.

As part of the tenth year anniversary celebration, the WSCIJ Thursday, hosted a public viewing of its documentary, ‘Report Women: The Untold Stories of Girls and Women in Nigeria’, at the Silver Bird Galleria, Ikeja, Lagos.

The documentary also marks the human rights day and the end of the ‘orange the world’ sixteen-day United Nations-led campaign to end every form of violence against girls and women globally.