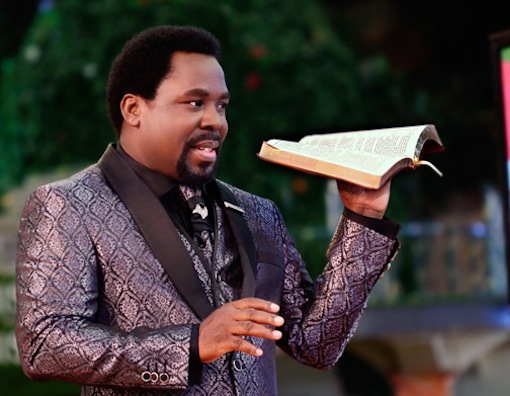 Controversial Nigerian pastor, TB Joshua of The Synagogue Church Of All Nations (SCOAN) has been named as the 2015 ‘Yoruba Man Of The Year’.

The honour was bestowed on him by the ‘Egbe Omo Oodua Parapo’, a coalition of 35 Pan-Yoruba groups drawn from across the world.

“We give this award to Pastor Joshua out of over 500 nominees screened by the Planning Committee of the Association,” Dr Akinwale Adewunmi, the Chairman of the award committee said in a statement following the group’s annual conference in United States.

According to Adewunmi, Joshua has added “honour and admiration to the Yoruba nation”, especially through his diverse philanthropic activities.

“We are proud that you are a Yoruba man with a global image in the annals of charity,” he stated, noting that Joshua’s charitable projects span 45 countries and aid ‘millions’ on a yearly basis, irrespective of their religion or ethnicity.

“Pastor Joshua started as a poor boy,” the statement added, acknowledging the cleric’s uncanny rise to prominence from a poverty-stricken home in Ondo State, Nigeria.

“He had no access to education neither did he enjoy any outstanding benefit from his society, yet he built himself. He educated himself and today stands out like a Professor in the greater university of life and living.”

It also cited Joshua’s contribution to improving Nigeria’s image abroad. “Across the world, many ask travellers from Nigeria: ‘Oh, you are From Pastor T.B. Joshua’s country?’ ”

The group noted that The SCOAN was arguably the biggest tourist attraction in the ‘South West’, adding that many foreigners would never have visited Nigeria if not for Joshua’s church.

“We are proud that this generation has produced a Yoruba man, a Nigerian and an African that stands this tall,” the statement concluded.

Intriguingly, T.B. Joshua has not been seen in public since his crusade in Mexico last May, over seven months ago.

The Yoruba people are one of the largest ethnic groups in Africa, constituting over 40 million people worldwide.